In today’s modern gaming society it is very unlikely that we’ll find we agree with everyone on every aspect of gaming all the time.

There are a few things that are almost, not absolutely, but almost universally agreed upon in the gaming world. For example Bethesda rarely make a bad game, Half-Life 3 being announced will likely be a sign of the end of the days and of course there’s also the fact that many, many gamers love an excuse to get a bit nostalgic.

The latter is what we’ll focus on briefly here, developers are acutely aware of how much the nostalgia factor has a grip on modern gaming. It’s for this reason that we’ve recently been given more of a choice when it comes to remasters and modern takes on beloved franchises.

Whether this throwback approach works is often down to the game itself. Some high profile instances in recent memory are the ill fated Duke Nukem title back in 2011 and the much more recent and infinitely more successful DOOM reboot that gamers were treated to last year.

Often developers will borrow elements from past titles that were hugely successful and apply them to modern games in an effort to pluck at the heart strings of gamers. It seems that this is the approach Rainy Night Creations (RNC) took when developing survival horror title Vaccine.

The basic premise of the title is this, the players character, either Rita O’Connor or Manuel G.P., is trapped in an environment populated with zombies and other nightmarish creatures, the sole objective being to survive this hellish environment with the ultimate goal being to find a Vaccine to rid your partner of a virus slowly consuming their body and likely to cause them to become a member of the undead masses.

You have a variety of tools at you disposal to be able to survive the situation you find yourself in, unfortunately all of those tools are limited and must be used with great trepidation to maximise their effectiveness.

Graphically the game is reminiscent of PS1 horror titles such as the original Resident Evil title. While this is a nice nod to games that blazed the trail for this form of title, it is extremely out dated and understandably leaves the game feeling less polished than it should.

Often times it is possible that a title that is not up with modern graphical standards can be saved by excellent gameplay and story telling. Unfortunately this is not the case with Vaccine.

The story is extremely limited, although it is possible to piece together parts of it from reading notes and interacting with different pieces of the environment there is nothing truly substantial in terms of a real fleshed out story.

The real achilles heel of Vaccine is it’s gameplay system. Even something as simple as navigating the levels can be a task, especially due to the camera angles which often cut to a completely different view, usually this happens when you’re heading around a corner or entering a new room.

The sudden camera cuts can often lead to perilous situations, with the player’s character suddenly being confronted by a previoulsy unseen adversary. While this camera system is another tribute to past titles it doesn’t make it a good thing, the same stands for the inventory and item use in Vaccine.

Items such as guns and knives can be found to increase your chances of survival, while usable objects such as chewing gum to boost you nerves & aid your aim and energy bars to increase stamina can also be found throughout the world. These items whether they be weapons or stat boosters all have to be equipped through the pause menu, breaking up any rhythm the game play may start to muster.

The movement and interaction system itself are also arduous and difficult to adjust to. It becomes quickly apparent that this was a title built around using the D-Pad and shying away from the thumbstick use of current titles, using the thumbstick will often see your character walking backwards in a pretty comedic fashion. Movement is key to surviving in Vaccine so when the basic gameplay system itself is a challenge the title quickly becomes extremely frustrating.

Another irksome factor in Vaccine is the games random room generator, this serves to make no two play throughs the same. However it can quickly make the game become monotous, especially in the play throughs where the random rooms that are generated are all the same or at least very similar.

While the graphics and story are limited they aren’t game breaking, the poor gameplay and awkward camera angles can be. While the game is probably one that becomes more enjoyable and sees you progress further with each play through its flaws make you not want to. Overall Vaccine conjures up thoughts of a game that has a lot of potential but has been exceedingly poorly executed. 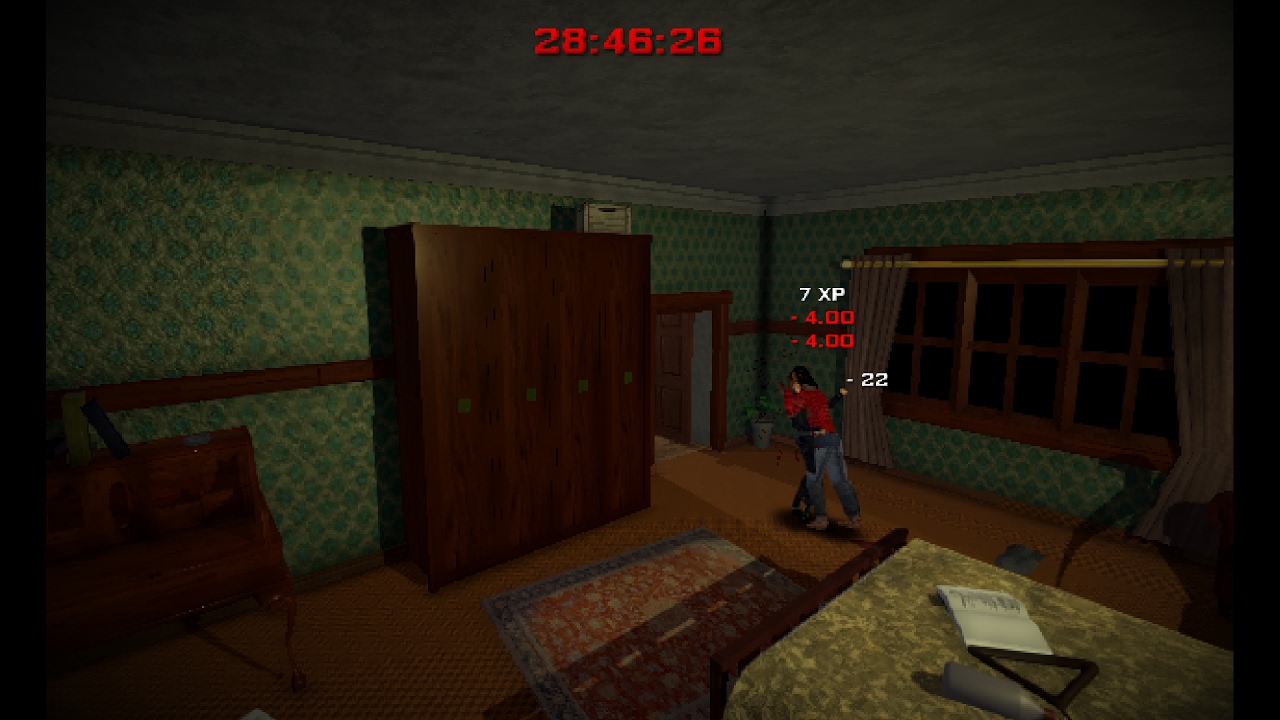 Vaccine tries incredibly hard to conjure up fond memories of a simpler time of horror games. Unfortunately it’s efforts are in vain and the results are a lacklustre reminder of how far gaming has come and that nostalgia isn’t always a good thing