“All the world’s a stage, and all the men and women merely players.” That’s certainly true in the case of action platformer Talent Not Included from Canadian indie outfit Frima.

Set in the fantasy land of Notthatmuchfurther, the game tells the story of three monsters, Zordok, Derp, and Kevin, who choose to take their love of slaughter, bloodbaths, and Shakespeare to the stage. Theatre critic and demonic entity, Zot, meanwhile has other plans, and attempts to sabotage the play.

Talent Not Included’s central conceit means that the whole world of this game’s entirely set on a single stage. Far from limiting the game, though, set dressing of Broadway calibre is rotated in and out to provide the necessary platforming challengers. Beyond this clever mechanic, though there is no need to pay much attention to the backstory – platforms? Check. Musters? Check. Collectables? Check. Quirky, characterful protagonists? Check, check, and check.

In keeping with theatrical tradition, the game is split into three acts, each with its own central character. The Knight (Cecil) takes up the first, the Rogue (Bonnie) the second and the Mage (Gundelf) rules the final act. Each character can run, jump and attack, and has a dash or dodge move.

Crucially, each character is fun to play, and gives you, the player, a move set that feels sufficient to deal with whatever the game throws at you. With double-jumps and wall-hanging thrown in for good measure, your (frequent) failures will feel like a lack of skill on your part rather than a failure of the game. Everything feels tight and precise, with near pixel-perfect timing required to master the challenges of later levels.

The challenge is significant. Platformers need to walk a fine line, hard enough to be fun, not so hard that it costs you a controller or two. Talent Not Included gets this just right; the first few stages offer a tutorial of sports – as confirmed by Cecil in a stage whisper – and then things get progressively tougher. Levels offer a neat balance between requiring lightning reflexes and learned routes and timing. Some you’ll crack straight away, whilst others will require repeated attempts, each one taking you a step closer to solution.

Talent Not Included’s challenge comes from the complexity of levels, the timing of jumps and the placement of enemies – one touch from which will knock a heart from your health bar. Stages are grouped in tens – lose all your lives before completing the tenth and you’ll need to start back at the beginning of that group.

Levels are masterfully constructed. The ‘stage’ is a cylinder along the top of which your character traverses. The cylinder is split into several individually-rotating segments. The whole stage is shown within a single screen – there’s no scrolling here – but by rotating individual cylinders in sequence and requiring your character to traverse from one side of the screen to the other, then back again, Frima has been able to create lengthy levels.

There’s a slickness that’s impressive, too; characters and enemies are beautifully animated in a paper craft-inspired art style, while backgrounds are beautifully detailed without ever obscuring vital information. Sound design is neat, too, full of wonderful touches. Smashing an enemy elicits an approving chortle from the unseen audience, while repeated failure will result in a cacophony of boos.

If you’re a platform aficionado you may be disappointed at the length of the game but for most the several hours of platforming action is just enough, whilst a fun co-op offering extends the game’s lifespan. Talent Not Included is a fresh take on an old-school genre. Recommended. 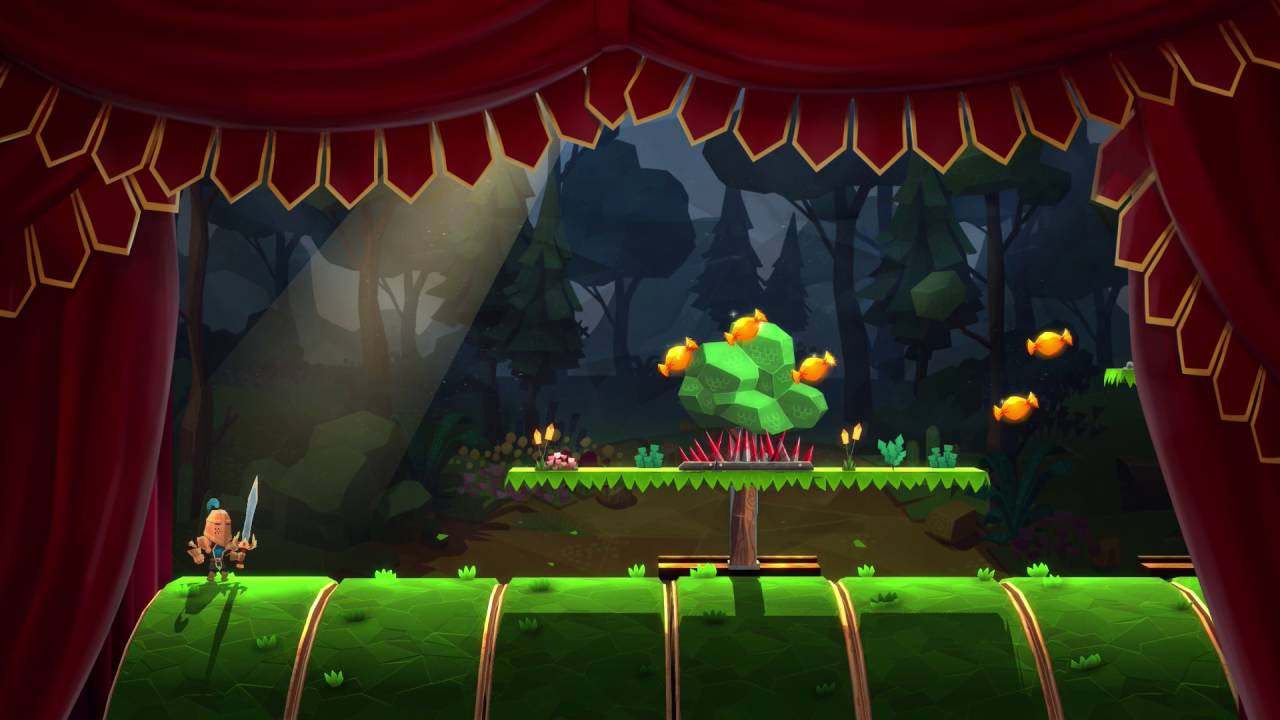 Talent Not Included is a good-looking action platformer that is more than just a pretty face. Whilst the backstory might be interesting, it’s the innovative level design the theatrical setting offers that really sets the game apart. With enough challenge to satisfy the hardcore platformer, the learning curve won’t immediately switch off the casual gamer. There’s a lot to recommend Talent Not Included.