Ahhh Strange Brigade, a nostalgic look back at the 1930’s but with the added fun of the undead! What better combination could there be?

It was a simpler time back then, and the Colonial British were into exploration in a seriously big way!

It’s that exploration that begins the story of Strange Brigade. After amateur archaeologist, Edgar Harbin discovers the tomb of Seteki he unwittingly releases her evil spirit. Bound by her nameless tomb, she had been sealed away safely for the last 4000 years. The Strange Brigade, a group of Secret Service agents are sent in by the British government in an effort to eliminate Seteki.

There’s not much in the way of character customization here and that’s quite deliberate, keeping the Strange Brigade story intact requires this limit. You can choose from one of the 4 starting characters each with their own unique traits.

Choosing your character allows you to select a different loadout for them. The loadouts are completely open, allowing you to use any of the unlocked weapons.

This makes choosing the class type completely irrelevant. The only thing you can’t change is the characters special ability, making it important to pick a character whose ‘special’ compliments your play style!

The characters are a mixed bunch, all completely different from each other –

Nalangu Rushida is the way finder, a female Maasai warrior who uses a Chamberlain Automatic rifle and Molotov Cocktails as her weapons. Her special is Raging Aura – a powerful blast that can hit multiple enemies within it’s radius.

Gracie Braithwaite is the resident engineer from Lancashire who uses a double-barrel shotgun, grenades and a special called Typhoon Snake. This causes an enemy to be dragged towards her, then they are used as an explosive projectile.

Archimedes de Quincy is the Brigades scholar, strangely and very un-scholar like he uses a submachine gun called the Kingsley Special and Sticky grenades as main weapons. His special ability is Beetle Blitz, a homing attack that will hit multiple enemies.

Finally, we have Frank Fairburne, a soldier who uses a .303 Huntsman rifle and sticks of dynamite his special ability is called Dynamite Dash, using it causes him to rush attack an enemy, sending them flying forwards. If that’s not enough for you they also explode when they land.

From the outset, your journey is followed, or should that be led, by the narrator, a rather happy fellow with a full on 1930’s English demeanour.

Not only is he there to explain what’s going on and why, but he adds a little comic twist to the game. Giving you little insights and hints here and there just in case you missed something obvious like the level boss appearing.

Although his quirkiness does help to split the action, especially when there’s a slight lull between the hordes of the undead, it does make the game a little too easy. Especially when he blatantly tells you how to kill an enemy, or pass an area.

The level designs are very linear, but with enough secret areas to discover and alternate routes to follow it makes it feel like you’re not simply going from A to B every time. That is until the narrator holds your hand and walks you to the next area.

The gun handling has been developed in such a way that each weapon feels different from the last. Each one has a good ‘feel’ when they bust up a zombie or 2. None of the standard weapons feels overpowered in fact they feel rather underwhelming at times.

This becomes very apparent if you get a little bit overrun as you can’t always bust your way through with the  standard weaponry. Even when you have upgraded them they can be a little lacklustre in their power delivery. Thankfully though there are random weapons chests scattered around the levels that give you access to a better weapon for a price. Pay a set amount of gold and you can get your hands on a much more powerful gun.

However these premium weapons are limited to one clip, once the ammo runs out so does the weapon. Hit zero and poof, the weapon disappears from your inventory. The plus side to these weapons is the sheer power of them, great for clearing out large lumbering groups or even better if kept until needed when the more powerful enemies appear.

Thankfully each level is scattered with traps, these are activated by shooting a glowing orb near them. These traps range from barrels to blades to swinging logs and everything else in between. The sheer amount of them is rather indicative of a ‘need’, What could that need be? Oh yes, it’s to compensate for the poor standard weapons when you get overrun.

The design of the maps is one of the games best bits. With multiple areas, twisting corridors, sudden dead ends and secrets upon secrets for you to figure out. Its the imagination of these levels that shows just what the game has to offer from a visual & design point of view.

The set puzzles generally aren’t to difficult though and if one was then the narrator usually sounds in to give you a hint. It’s the usual array or pressure plates and shooting targets to open doors that have been placed to stop you. The simplicity of the puzzles is more than likely due to the nature of the multiplayer side of the game.

You don’t want puzzles in the style of the mechanics found in Destiny’s raids, ones where you need a  set number of people to get passed it. The game is designed to be played solo or in a group, and as such you need to be able to progress alone.

Speaking of multiplayer, the game changes slightly with more players in the game. Some puzzles are changed from their single player version and they may require more than 1 person to activate certain switches or pressure plates etc.

Strangely, however, the loot from golden chests isn’t shared, its first come first served, meaning that people may not want to be switch number 1 if they have no chance of getting a prize at the end. The biggest change when playing with more than 1 player is the number of enemies that appear.

As more people are playing more enemies spawn, this can lead to a hectic shootout as enemies descend on you from all angles. This does have the bonus of allowing you to constantly power up your special and set it loose on multiple enemies at once. If you’re looking for the biggest combos, this is the time to get them.

If you fancy something a little different when you manage to get the whole gang online then there are the other modes to try out. These are, as their titles suggest, rather self-explanatory –  Score attack and horde mode.

The multiplayer game is where Strange Brigade comes alive, all the little gripes above vanish into a hectic mashup of traps and powerups. More enemies, more puzzles more killing, just more everything!

It’s a rather lonely experience when playing solo, and although fun it gets boring quickly. As a shooter game it’s missing something, as a puzzle game it’s missing even more. Heck, even the comedy aspect of the vignettes and the narrator aren’t that appealing after a while. but when you squad up it’s amazing! 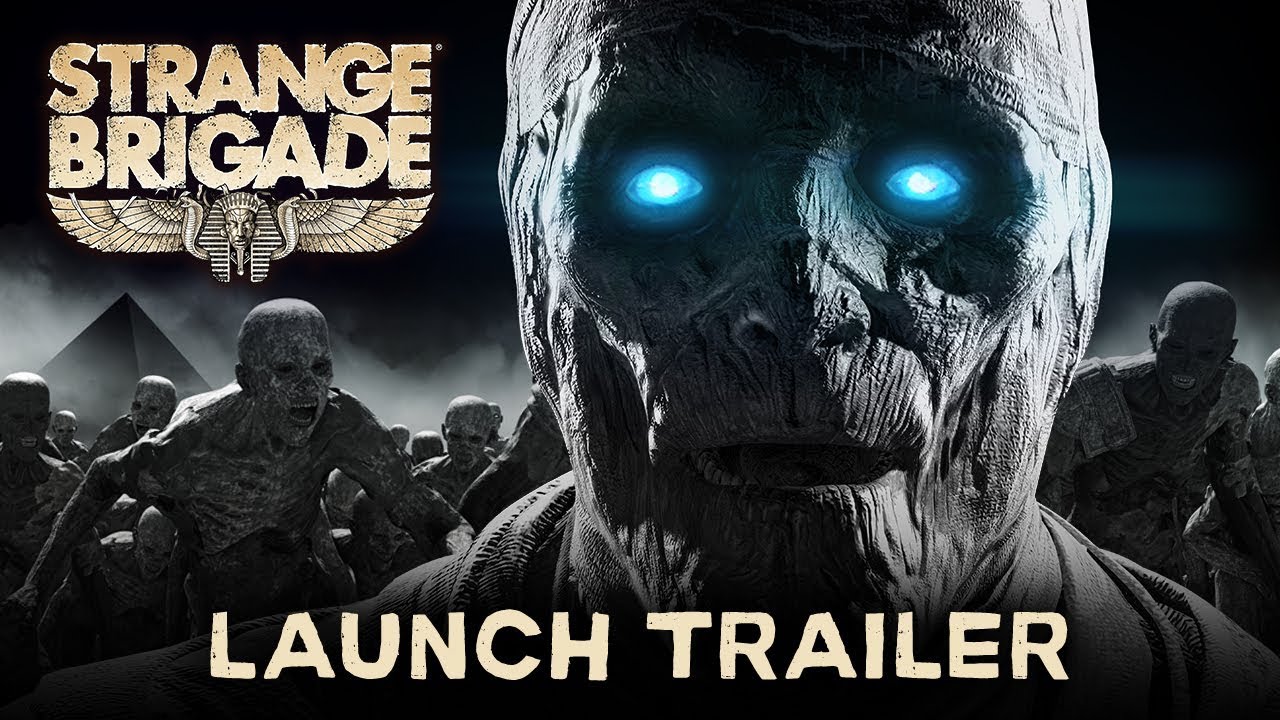 If you’re after a game that’s a little different from the norm then Strange Brigade is a good choice. It’s quirky and fun but you probably won’t be coming back to it over and over again if you’ve not got too many people to play it with. It’s best played how it was intended to be played – in its full 4 person glory! Strange Brigade is a novel third-person shooter that’s definitely better played with friends.