Wow, Deadpool was fun. We enjoyed the 2016 movie adaptation of Marvel’s most irreverent superhero immensely. And if there’s one thing that Wade Wilson, aka Mr Pool, is known for, it’s not following the rules. That bit when Wade takes Vanessa on their first date, and Ryan Reynold’s character impresses Morena Baccarin’s character with his skill at putting balls in holes? That’s NOT how you play Skee-Ball. That’s against the rules.

But it did look fun – not least the bit when two of the world’s most beautiful people smushed their special bathing suit areas together.

Skee-Ball on Nintendo Switch, developed by Vedran Klanac and published by Ocean Media, is an officially licensed Skee-Ball arcade game. And it sticks to the rules. And it’s nowhere near as much fun as Wade and Vanessa made it look on film. Though, to be fair, little is.

Skee-Ball, if you’re unfamiliar with this fairground attraction, is indeed a game about putting balls in holes. And the more skill you display in ball-holing, the greater your score, and the more tickets you win. In real life, those tickets can be exchanged for prizes from your local friendly fairground employee (who’s probably wearing a soiled vest and chewing a soggy cigar), up to and including a Voltron: Defender of the Universe ring (por favor).

This being a digital version of the fairground game, your tickets are used to unlock different cabinets and game modes. Skee-Ball on Nintendo Switch will never let you become a Defender of the Universe. Or get to act out seasonally-themed adult fantasies with Copycat.

But what is Skee-Ball? In this game of skill, which sees its 110th anniversary this year, you roll a ball up a slope (an inclined plane, science nerds). There’s a ski-jump style hump at the end (known as a ‘ball-hop’), which propels the balls into the air. The aim is to get the ball into one of a number of buckets at the far end of the cabinet. The harder the bucket is to reach, the more points you score. And points mean prizes – the higher your score after rolling all nine balls, the more tickets you win.

The game is spiced up with challenges – hit the same bucket three times in a row, for example – which, if successful, awards you with bonus balls which increase your score when deployed. Not that Wade ever needed such trickery to win over Vanessa’s heart, mind you.

Skee-Ball has a simple premise, then, but so has ten pin bowling, and look how good that was on a Nintendo console. An utter, absolute triumph, just as Deadpool triumphed over Frances at the end of the movie.

[mks_pullquote align=”right” width=”300″ size=”24″ bg_color=”#000000″ txt_color=”#ffffff”]”By delivering a pure, unvarnished simulation, Skee-Ball robs you of all the fun of the fair.”[/mks_pullquote]Skee-Ball, here, on Nintendo’s latest console, is a far from triumphant experience. It’s everything that Wii Bowling wasn’t. Controls are finicky; sliding the ball left and right with the left stick, angling your shot with the right stick, and holding down the ZR button to power the shot. I mean, there’s a touch screen right there, buddy. But even in handheld mode Skee-Ball ignores what would clearly be the most intuitive way to aim and fire your balls. We understand motion controls are coming in the summer, but right now, it’s a huge gap.

Presentation is functional, sound effects the same, and the in-game music is either forgettable or instantly irritating – take your pick.

But worst of all is the grind. To unlock what might be more interesting or challenging game modes (don’t expect miracles here; they’re not *that* much more interesting or challenging) will take hundreds or even thousands of tickets. In fact, to unlock all the game modes, you’ll need over 5,000 tickets – so you’re looking at playing hundreds and hundreds of games. It’s another 8,000 tickets if you want to unlock all the additional cabinets.

And unless you’re seriously into Skee-Ball, you’re simply not going to (unless, you know, you’re trying to review the game and HAVE to unlock it all). The whole thing just smacks of a missed opportunity. The Switch is the most tactile console of this latest generation. For a game like Skee-Ball, eschewing the physicality a touchscreen or Joy-Cons offer is an absolute sin.

But even the simple fare on offer could have been delivered with more character and humour. Our favourite video game interpretations of fairground games of skill like Skee-Ball all recognise the added value that video games offer. They have dazzling effects, brilliant characters, or crazy storylines, but perhaps that doesn’t fit with the official license.

Everything Skee-Ball does, it does perfectly solidly. It just doesn’t do very much, and by delivering a pure, unvarnished simulation, Skee-Ball robs you of all the fun of the fair. 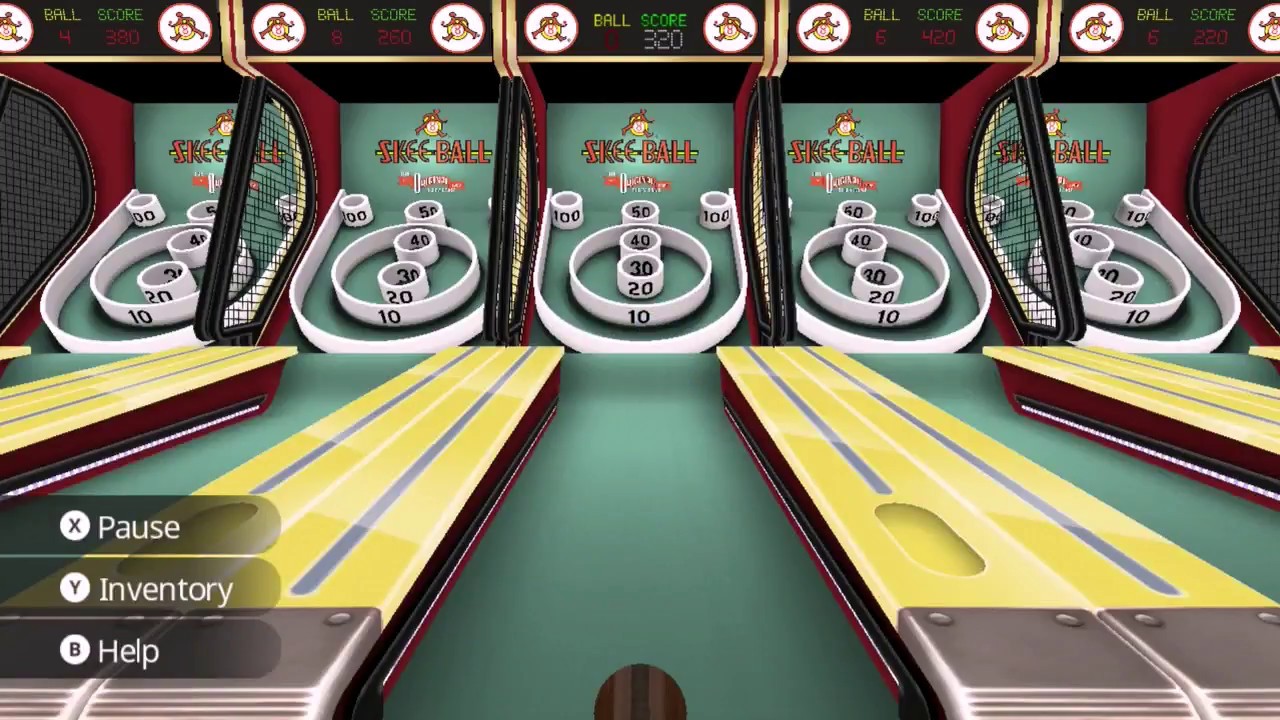 None of the fun of the fair.

Here at Any Button Gaming, we love games, regardless of platform or genre. But that doesn’t mean we love all games equally. Skee-Ball’s undoubtedly a faithful representation of the real thing, but as that’s all it is, it’s no fun on a console. Motion controls – if implemented as hoped – will improve things no-end, and could really turn the experience around. But right now, we’d much rather hold our balls in our hands.

And we can’t end without mentioning the £17.99 elephant in the room. A game’s value is relative and subjective, so we never adjust a score based on a game’s RRP, whether high or low. We will, though, say if we feel a particular title represents good value to us – or the opposite. Even if we were made of money, Skee-Ball feels like a lot of money for very little content.

We’ll update our review if and when motion controls are implemented.