Just recently, the Nintendo Switch is getting a lot of new releases. While they may not be Triple A titles, one of the latest games to grace the Nintendo eShop is Shiftlings Enhanced Edition.

Shiftlings is a co-op focussed platform puzzler that can also be played solo. You are tasked with simply completing each level’s objectives to progress to the next. In total there are five planets, each comprised of 10 levels with an added bonus level per planet giving a total of 55 levels. If you’ve played the original on Steam, the Enhanced Edition has a bit more to offer, with a better progression system and an improved level layout, which helps both single and multiplayer.

You take on the character roles of Purple Plop and Green Goop, tethered together by a single rope. This rope plays a key role on how you complete the levels. As you will probably notice, one character is inflated to the point of nearly bursting, which does add a small comical value to the game. With a simple press of a button you can alter which character is inflated – this enables you to get one character to one area of the level with ease. When playing solo, the game enables you to control both characters at once or each individually.

In solo mode, we did find it took time to get used to the controls and using the two characters at once. The button layout also got a bit confusing and made completing the level a bit of a challenge. This can be frustrating as one wrong button press can cause some issues as you could get a character stuck in a certain area or end up having a character hanging off the edge of a platform. Our advice is to keep at it! You will get it eventually, after all, you do have 55 levels to get it right. The best way to play Shiftlings is to play co-op – it is so much easier as you can just talk to your player 2 and complete the levels with ease.

The developers Rock Pocket Games have made full use of the Nintendo Switch capabilities. Shiftlings Enhanced Edition runs at a smooth 60FPS with no issues whatsoever, it also has the option to drop it down to 30FPS to save battery life while playing handheld. Handy! The visuals throughout the game are excellent with vibrant, colourful scenery and characters.

The game’s soundtrack is, well, very futuristic, but it’s not something you would remember after a few days. One good audio feature is the brilliant Narrator. He is rather bloody funny! You can tell Rock Pocket Games have worked hard on getting some of the dialogue timed well with the actions of the two characters. 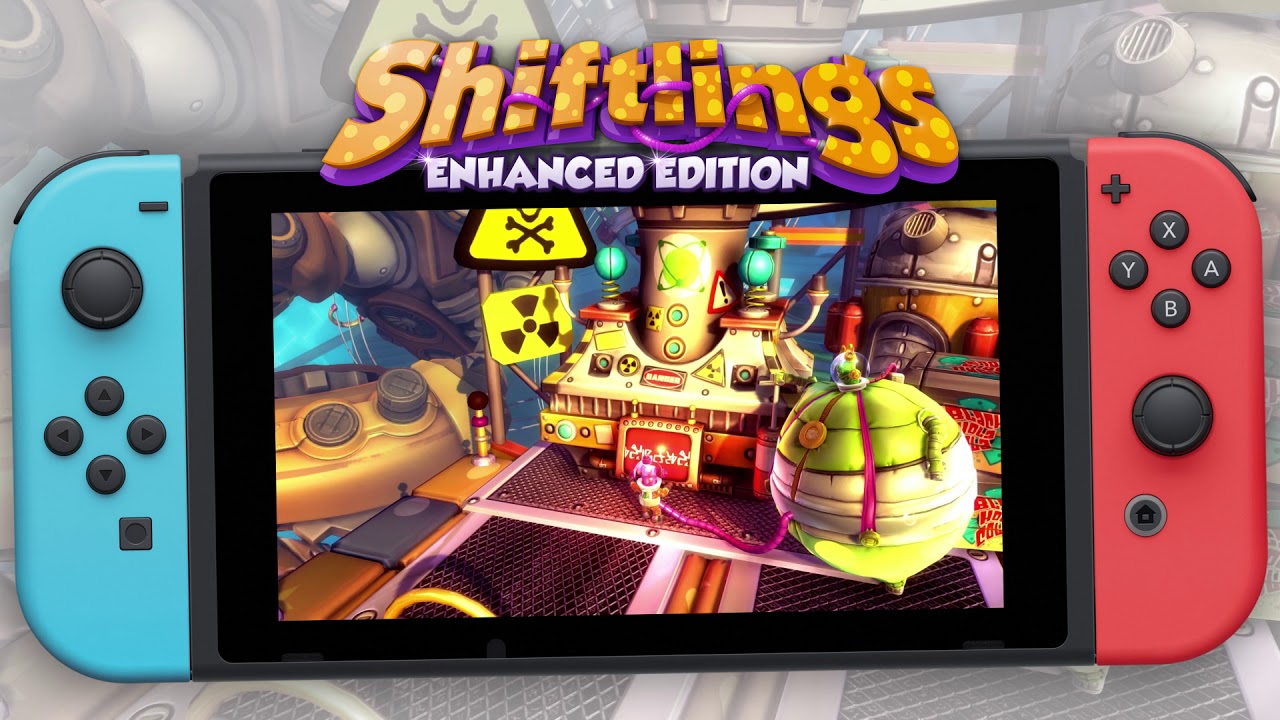 While Shiftlings doesn’t give the player much of an incentive to beat all of the fifty five levels in succession, it is a game you can pick and play on the go.

A simple platform puzzle, ideal for a two player situation. A brilliant, challenging Co-op game. If you fancy more of a challenge, the solo play option could be for you. If you fancy a game for when you’re on the move or playing with a friend or relative, definitely give Shiftlings Enhanced Edition a go.