Almost a year ago a video of Gamebeat’s Dean Takahashi failing at rock-hard performer Cuphead went viral, as the veteran games journalist was defeated by what seemed like the simplest of gaming tasks. “Look,” a bunch of idiots cried in response, “so-called games journalists get paid to be rubbish at games. Give their jobs to me, a neck-bearded shut-in who lives in my parents’ basement and who has only the most tenuous of grasp of the written word.”

I had more than a little sympathy for Dean. Not only is Cuphead rock-hard, the video was taken wildly out of context and weaponised to further the feeble, gasping cause that identified itself GamerGate (“It’s about ethics in games journalism, and absolutely not about stamping out any kind of diversity in games, we swear.”)

It’s also fair to say I am not good at video games. Astoundingly bad, in fact. Ask anyone. It could have been me in that Cuphead video. In fact, when I played it at EGX 2017, surrounded by crowds of people, it was me.

So if any genre is destined to give me the absolute heebie jeebies when it comes to playing for a review, it’s the twitch-platformer, all cutesy visuals and reflexes-of-a-mongoose demands on the ageing hands that cradle my controller. But, I persevere, getting a decent way into the excellent Binaries and almost all the way through the ugly-but-beautiful-on-the-inside Slime-san.

But Runbow nearly broke me.

Arriving on Nintendo Switch by way of its debut on WiiU – and never was there a more essential title on an ailing platform – Runbow brings with it an impressive trophy cabinet and a strong desire to make me give up games for good and go live on top of a mountain. Headup Games and 13AM Games have delivered a bright, polished, slick, wonderful multiplayer-focused platformer. It’s astonishing. I’m just astonishingly bad at it.

While Runbow offers an excellent – and challenging – single player experience, it really comes into its own with friends crowded ’round your console. The game is beautiful, and beautifully simple too. Simply traverse across a landscape, leaping from platform to platform, and reach the end. Nothing is as simple as it seems, though. Runbow’s rainbow colour palette hides a secret. Platforms, walls and other hazards are hidden or revealed as the background colour changes. In Runbow, if you can’t see it, it doesn’t exist. So that bright green platform you were confidently leaping to disappears when the background colour changes to match the platform’s, sending you plummeting to the floor and your demise.

It’s not like the game doesn’t give you the tools you need to do the job. Movement is silky smooth and you have the necessary jump and dash/double jump moves to traverse any level. There are no dirty tricks either – even the colour swiping gives you every opportunity to plan your route. Runbow signposts other hazards too, including reverse gravity, screen flips and the like.

[mks_pullquote align=”right” width=”300″ size=”24″ bg_color=”#000000″ txt_color=”#ffffff”]”Multiplayer is the point of Runbow. It’s the reason the game exists.”[/mks_pullquote]Playing through the single-player adventure, my abject failure to get to grips with this mechanic, time my leaps to match the colour changes, or make any kind of progress, left me frustrated. But I take this seriously, so night after night I made slow, grinding steps forward. Even though I didn’t particularly enjoy my alone-time with Runbow, the commitment to slick presentation and clever detail is clear. The game is overflowing with neat touches and, to be fair, my repeated failure was only ever my own fault.

Runbow shines brightest, though, with friends.

There are three different multiplayer options, and all are an absolute hoot. With up to eight local players, things are incredibly hectic. ‘Run’ sees you and up to seven of your closest enemies (read: “family”) sprinting across the ever changing colourful landscape to be the first to reach the end of the course. ‘Arena’ is the deathmatch of the Runbow world – punch your fellow Runbowers into submission and be the last character standing. Finally, ‘King of the Hill’ is just exactly what you expect – guard your place on the map and fiercely repel all those who would take it from you.

And it was playing these three modes with friends that made me realise I had got it all wrong. Multiplayer is the point of Runbow. It’s the reason the game exists. And only minutes in I had completely forgotten about the hours of frustration the single player game had given me. No, I hadn’t suddenly, miraculously gained Runbow superpowers. I still mistimed jumps and failed laughably often. But in the company of friends, and laughter, and mostly-friendly competition, none of that mattered. We laughed at each other’s hilarious failures, and became grimly silent while pretending not to be taking it too seriously when victory seemed within our grasp.

Multiplayer Runbow is everything a party game should be. Even playing online – handled robustly with reasonable match making delays – is fun, though you do lose that human interaction element that makes couch play such fun.

Despite its humble origins, Runbow just feels like such a quality product. Bright, cartoony visuals downplay the amount of detail and personality that’s built into each of the tiny characters. You’ll see plenty of familiar faces too – Shantae is available from the start, while Shovel Knight, both Juan and Tostada from Guacamelee, and a host of other characters are unlock-able as you progress, or available in downloadable DLC.

The boppy music is annoyingly catchy but never grates, while the sound effects are sparse but punchy. The game works well on the small screen, too – text remains visible and the action – although hectic – retains enough clarity that you rarely lose your own character, even in an eight-player melee.

As a multiplayer game, Runbow is an absolute delight. 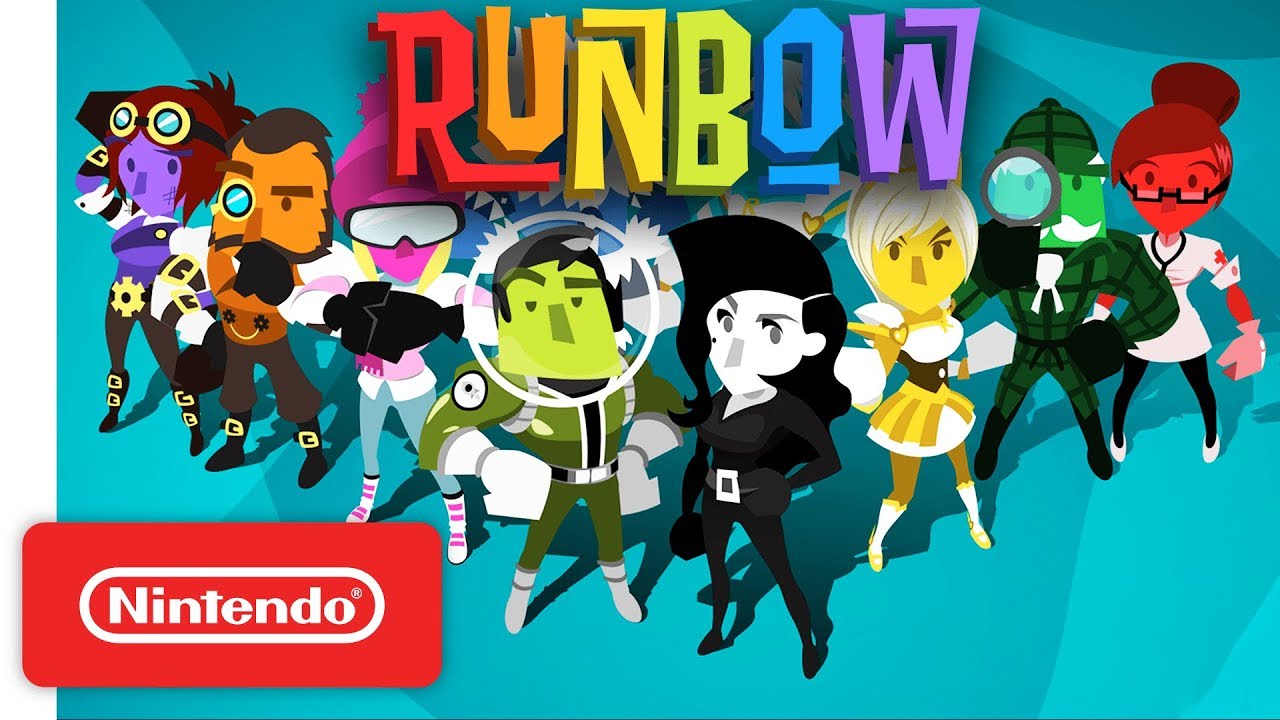 Release Date: 3 July 2018 on Nintendo Switch. There are versions of Runbow available on WiiU, Nintendo 3DS, Steam, Xbox One and PS4.

Runbow is best played with friends, sat on the couch or gathered round the Switch’s tiny screen. It’s a riotous explosion of colour and comedy, but as a single player game it loses some of that appeal. Despite this, the drive to see it through to the end and unlock barrow-loads of additional characters remains strong.