Gamers have never had it better than they do now with choice and variety of games, especially consoles which has seen huge growth on both the online scene, and pretty much every title available digitally from here on in. One new offering peaked my interest from the name alone. Nine Parchments may sound like an RPG, but in reality, twin stick shooting action takes a leading role. This is the latest title from Frozenbyte, the Finnish developer behind the cult classic Trine series. So we’re off to a good start there with a decent development track record. But is this Action RPG worth your time? Or should these parchments be left buried in the dungeons?

Starting off in the School of Wizardry, you are able to select initially from either a male or female protagonist. After causing a but of magical kafuffle, an explosion leads to the mystical parchments being blasted from the Hogwarts style school out into the wilderness beyond. And the apprentice wizards take it upon themselves to save the day and restore the parchments to their sacred home. And thus, your journey begins.

You begin with three basic spells to aid you on your quest. And it is these spells that form the twin stick shooting aspect of the game. A nice rehash of a traditional shooter in that respect. The action is semi-top down, semi-isometric and it works very well. Although the camera is restricted, this gives you more of a challenge as you work your way through each area.

As you progress and gain XP, you unlock more spells and level up becoming stronger and wiser in the process. However, you will find yourself switching spells quickly as a wide variety of enemies attack at once, it’s almost certain that some will be immune to one spell. And this is where the games tactics come into play, forcing you to plan your attack quickly, whilst moving around and adapting to the threats in front.

Movement itself is swift, you can teleport a few steps in front of you, leading to being able to quickly evade oncoming attacks, escape fast when being charged at and flanking your foes to keep them at distance and disadvantage. It feels slick, solid and fun to work out not only how to defeat each enemy, but how to outsmart them too with changing of spells. Whilst you won’t find yourself in this situation in the early stages of the game, the challenge soon starts to ramp up after the first couple of bosses. Especially if you’re going solo. Speaking of which, you can co-op. And this might be your better option as going solo can soon become tiresome and repetitive. But take to multiplayer and this is where the game really shines.

You have a range of spells, staves and characters to unlock as you progress. What you won’t find however is a large amount of loot. You’ll be disappointed if you go into this expecting so. There are collectables on each stage though to add to exploration.

Graphically, Nine Parchments is simply beautiful. It’s an artistic pleasure to watch and play through. Frozenbyte have never failed when it comes to imagining up a fantasy world and if you loved the visuals of Trine, then you’re going to be head over heel for Nine Parchments. And the same can be said for the excellent soundtrack that accompanies you along your journey. The music fits the settings perfectly as you progress through.

There is quite a lot of gameplay within the game. Early stages you may find yourself breezing through quickly, but the difficulty soon ramps up and slows down your progress. However you may struggle to see it through alone and this is solely down to the aforementioned repetitiveness. If you can team up with friends, online offers without question the best lifespan and fun within Nine Parchments.

Frozenbyte have managed to conjure up another fantasy gem. If you’re a fan of action RPG’s or twin stick shooters, the mash up between the two works fantastically well. And whilst it isn’t without its niggles with low levels of loot, there’s still a lot to unlock and collect along the way. Going solo may become a chore. Playing with friends will heighten your experience, but what we have here is a journey worth exploring, and a tale worth hearing whether you’re alone or not. 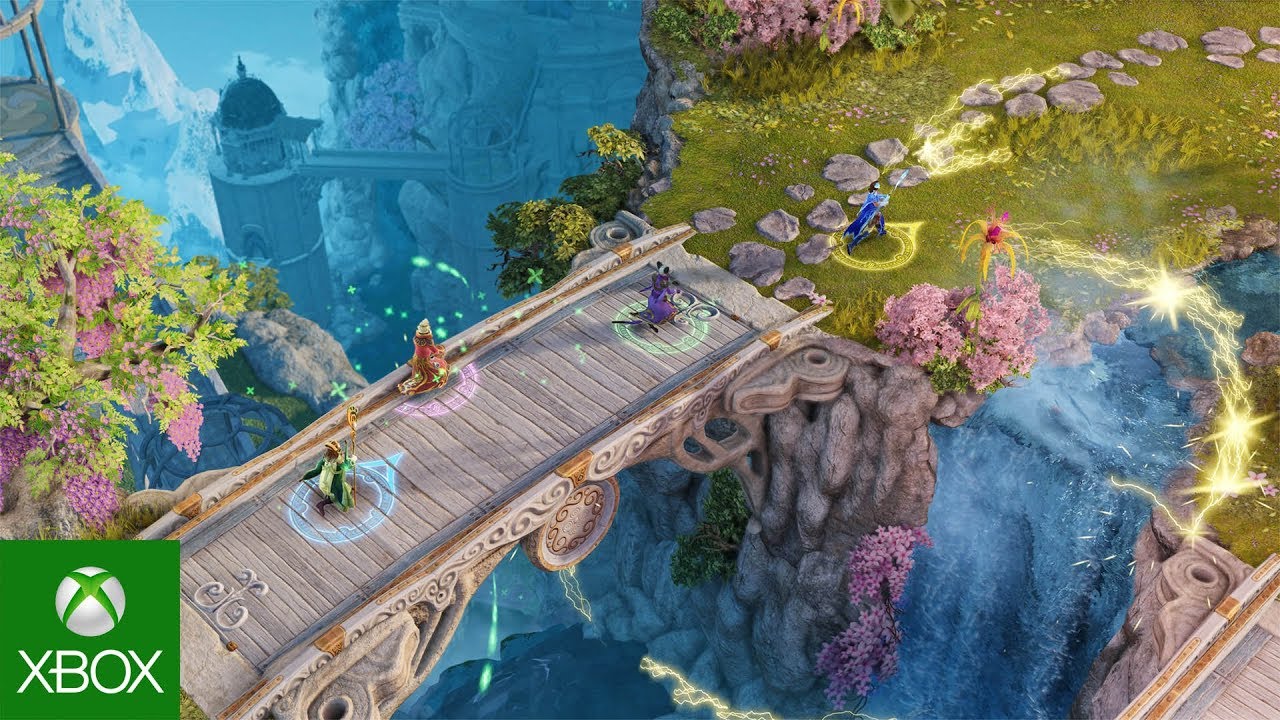 Nine Parchments is available now on the Xbox Store, priced £15.99. And is also available on PC, PS4 and Nintendo Switch. (Xbox One Reviewed)

Whilst not without its flaws of repetitiveness, Frozenbyte have conjured up and magical Action, twin stick RPG that is both a joy to look at and to play through. Especially with friends.