Go on then, you figure it out.

Odd, isn’t it? Being dropped seemingly in the middle of something with certain expectations of at least some sort of explanation and yet finding little to no context at all. Well, this is exactly what Mugsters does right. It places you into the first level and then, calmly and smugly, sits back and says, “Go on then, you figure it out.”

Mugsters features no guidance or tutorial from start to finish. This took me a minute or two to get used to but I must admit that, for me, it is one of the games most endearing features.

I can see how this could frustrate some gamers, especially in this era of ‘video game handholding’ and linear gameplay. For me, though, it was a joy to experience this reversion back to my childhood. Mugsters took me back to a time when games just existed and you either figured out how to play them or….well…you didn’t…..

I wasn’t sure what to expect when I installed and booted up Mugsters. Unlike most games where the title gives you a good idea of what is going to happen, Mugsters leaves much to your own imagination.

My imagination jumped to some kind of gangster game. I have no idea why my brain made this leap, most likely because Mugsters bears some resemblance to Mobsters. That’s just a little insight into how my mind works.

What Mugsters is though, in short, is an adorable island puzzle game visually reminiscent of mobile games using a low poly art style. The game relies on this simplicity to focus the player on the puzzles.

Gameplay and puzzling has clearly been the focus of Team 17 and it shows, with a fluid movement system and no visible HUD or objective markers. It feels like they want to draw you in to the levels without too much distraction and the effect is almost hypnotic with vibrant comic book style colours.

The main objective, I found through playing, is to escape each island you are on by finding your way to the plane which is the only way to exit the island safely.

There are 3 optional objectives for each level which are to save the humans trapped in tubes, collect a set number of crystals and to destroy something on the island (satellite arrays, generators, etc.)

The objectives stay the same throughout the levels so once you get the hang of the gameplay you will find yourself looking out for the optional extras to get that sweet 100%.

When the player rescues the humans in each level from their experimentation tubes, they will follow the character around the map until they’re escorted off of the island at the level’s end. This seems easy enough.

The trouble lies in the fact that there’s no way of telling the following humans to just wait in a spot, they will always attempt to follow you, and given that their pathfinding AI seems to be a little lacking, they will often fall through gaps as you’re jumping over obstacles or get caught on pieces of the environment as you’re walking around rocks. This can lead to frustration when trying to get that 100%.

Checking your objectives though can be a bit of a chore as the on screen font is far too small to read easily. The camera, while simple enough to control with the right analog stick, can be frustrating at times. There’s no way to zoom the camera in and some of the items that you have to interact with can be quite small; making them difficult to see with the camera’s only zoom distance.

On top of that, if there are multiple players in a level, it’s quite easy to lose which character you’re controlling as each sprite looks too similar despite the customisable options.

Couple all of that with the fact that multiplayer is neither online nor anything different than the single player levels with extra players and you’ve got something that feels lazy and tacked on. Especially when multiplayer in a game like this has so much potential.

Just take a look at Portal 2 and the inventive way it fuzes co op into it’s puzzles or BattleBlock Theatre where you can work with (Or against) your partner to overcome obstacles. The game could have just gone with a drop in/out style of co op play as it stands and it just feels disappointing that it does nothing more to add any other challenge. 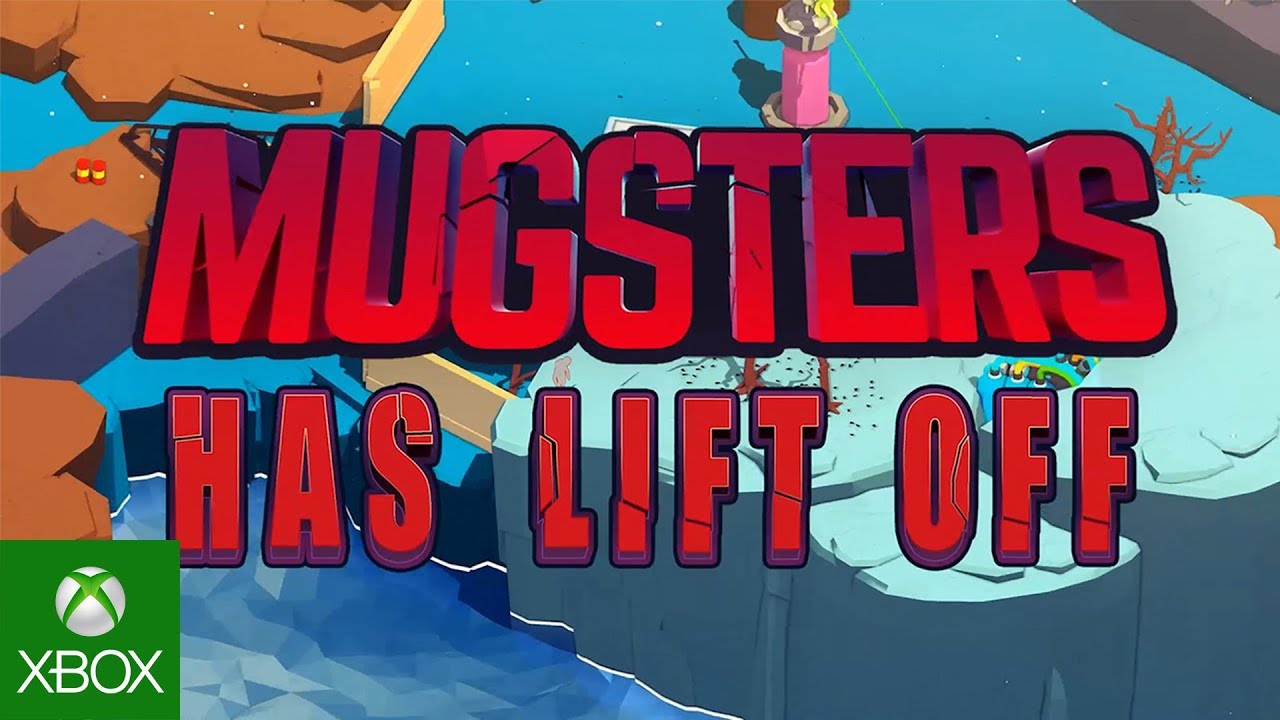 Mugsters has the potential to offer you hours of fun puzzle solving and (occasionally frustrating) 100% achievement hunting and replayability. For those reasons you could easily get your money’s worth out of this low priced indie title.

Mugsters is a great little puzzle game that keeps itself streamlined and focussed on what is important , the puzzles. It is bright and colourful and will keep you coming back for more as you attempt to 100% every level. It is somewhat letdown by a lazy multiplayer add on and the on screen text is very hard to read but this doesn’t detract too much from the overall experience. It is a game you will enjoy if you like puzzles and fluid gameplay.