Metroid Prime is a game that first released in 2002 for the Nintendo GameCube, but the series goes all the way back to 1986 on the NES. Metroid Prime was developed by Retro Studios alongside the series creator Yoshio Sakamoto and was the first in the series to go 3D.

Metroid Prime is a first person adventure, a genre the big N started with this game, it follows the adventures of Samus Aran, a lone bounty hunter who’s identity is mysteriously concealed (unless you’ve played the older titles).

The adventure starts when Samus receives a distress signal from an unknown space station orbiting an alien planet called Tallon 4, but she soon finds out that its in fact a space pirate research facility overrun by experimental specimens which the space pirates have struggled to overcome.

As you explore more of the station, you find records throughout by using a mechanic unique to Prime. Scanning is used to open doors and find out information on enemies to find their weak spots, or alternatively, it can be used to tell the story. By scanning the environment, you eventually find out that the space pirates are using a weapon called Phazon – a highly toxic substance that kills most creatures and plant life on contact – in rarer cases it causes mutations, making them more powerful and resilient.

You fight a huge beast known as the Parasite Queen at the Center of the Space Station, however, once you defeat the creature it falls to its death into the station’s core. This causes the station to explode, prompting you to escape before the station is blown into space. On your escape, you see your arch nemesis Ridley and you follow them. Just as you call the elevator, an explosion hits Samus, making the power suit malfunction. You lose all of the abilities you previously had. Once you escape, you see Ridley flying off to Tallon 4, you lose him after landing on Tallon Overworld.

As mentioned above, Metroid Prime is a first person adventure and tasks you with exploring outer space – something the series is famous for. This time, instead of the 2D side scrolling iteration, this is entirely done from within the visor of Samus, which gives a more intimate and isolating experience that, at times, makes you feel like you are really exploring the planet yourself. The game plays very similar to modern day shooters, but instead you move and turn with just one stick which makes exploring surprisingly easy to manage. In combat you have a targeting system to help you shoot enemies, which, while using, you can strafe, jump and dodge enemy attacks. There is plenty of platforming but it can feel a little clunky until you get used to timing your jumps right.

You get a detailed 3D map that shows you where you need to go next, and if that isn’t enough, then you get a never before seen hint system to put you on the right track. There are plenty of enemies to shoot and explode with your varied weapons while exploring.

For a game that came out 16 years ago, the enemy AI is great. From little creatures called zoomers who just get on with their day, to the highly intelligent space pirates, each AI makes the world feel alive and makes you think of a way to overcome any obstacle. For example, space pirates lay in wait to ambush the hunter, then try to outflank you which really keeps you on your toes. Not only that, but when they ambush you they will lock doors to stop you escaping, forcing you to fight for your survival.

Metroid Prime also has plenty of larger than life bosses who will test what you have learned so far. They all have their weaknesses and unpredictable nature which makes for a tense fight. Each boss holds a power up ranging from the iconic morph ball to the awesome super missiles (my personal favourite) further increasing the number of places you can explore.

Metroid Prime is an amazing looking game and you wouldn’t believe it came out in November 2002. The attention to detail on the planet of Tallon 4 is outstanding and has yet to be matched, as creatures nestle in the dirt, plants wiggle and lava boils and spits up at you. It’s a great feast for the eye.

The most impressive part of the graphics, which, in my opinion, Nintendo was showing off what the GameCube could do, is that Samus’ visor became part of the environment with bug splats, heat sources steaming it up, water drops and electricity making the visor go static and mess with the suit’s targeting system.

The soundtracks and sound effects really give the game a great atmosphere and also make you feel you are on an alien world – it really makes you feel alone. Each location has a different theme, from the alien sounding music of the Chozo Ruins to the peaceful snowy Phendrana Drifts, each sets the tone of the game perfectly and makes you want to turn the volume up more and more. The sound effects are great too, with water gurgling and machine pistons pumping, it all makes the world feel like a living breathing planet which you just want to explore more and more of. 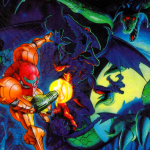 Metroid prime is a visually impressive game with great gameplay and sound, the world feels connected and massive and makes you want to explore just one more room.

The game still holds up as one of the best 3D games to date and I wholly recommend this game to anyone who is a retro fan it’s a must!