Many of you may wonder what Magic: The Gathering is? Maybe many of you already know, or already partake in this style of gaming. Many years ago, I bought a deck for the main reason being, I liked the look of the deck and the artwork. I didn’t have any intention of playing the game or what it might entail. Recently, aside from writing news and solo pieces on console gaming, me and my friend here at AnyButtonGaming, Craig Gorman, have been exploring the world of Table Top Gaming. We were at Rapture Gaming Festival on the weekend of the 11th and 12th of November, at the Charter Hall in Colchester, and there, we had our chance to try this game for ourselves. We had a great time learning the basics of the game, and after we opened up our chosen decks, we were ready to battle straight off the cuff. It didn’t take long for us to work our way through the battle, and after around 10-15 minutes, we had played our first official game of Magic: The Gathering. Below, I will give you the basic introduction into what Magic: The Gathering is, and how you can get started.

We were handed a starter deck each and they were of our own choosing. There were 5 started decks made available for us to choose from.

Magic: The Gathering has five distinct colours of mana used to determine the strategy or overall theme of gameplay.
These colours are;

White
Focuses on healing and restoration, with the ability to utilise many smaller creatures quickly.

Blue
The power of control. Blue is all about not letting your opponent make his moves, and ensuring your own. It also boasts some of the best draw power in the game.

Red
The colour of fire. Red has the ability to burn through your opponent’s life quickly, and mercilessly. Red is all about impulse and passion. Act first, think later.

Green
The power of nature and growth, green focuses on sheer brute force, and power-ups, with the drawback that some of these cards have high converted mana cost.

Colourless cards have none of the above 5 colours in their cards cost.

Details
Most of the time while cards are on the battlefield, the colour of cards isn’t that important. At many times, however, colour is very important. Many cards have protection from certain colours, and others can’t be blocked except by creatures with the same colour as them. Many black spells can only destroy non-black creatures. 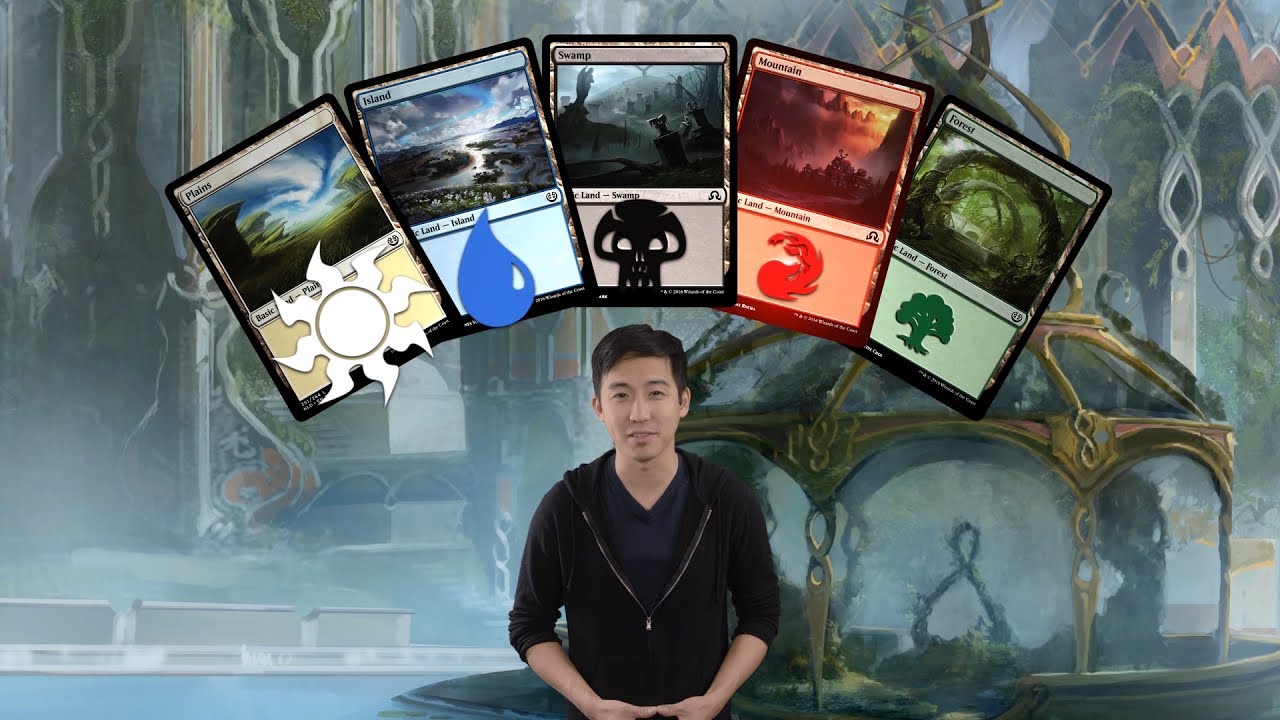 In a game of Magic, you and your opponent are Planeswalkers, powerful mages each armed with a deck of Magic cards representing lands, creatures and spells. Each player must summoned creatures and cast spells, trying to knock the other down from 20 to 0 life and win the game. Below is a run down of what is in a deck and what they represent as parts of your deck, and will give you an idea of what you can choose to play with.

Mana is the resource that fuels all of your spells in Magic. Each deck has land cards which generate mana. As the game goes on, you’ll put more and more lands into play from your deck, giving you access to more mana to summon bigger creatures and cast more powerful spells.

Creature cards are an essential part of your deck. They represent the wide variety of beings you’ll encounter in the worlds of Magic. From angels, demons and dragons to human soldiers, merfolk wizards and goblin shamans, creatures range in size, speed, and power. Your army of creatures attack and defend at your command, helping you defeat your opponents.

The rest of your deck is made up of powerful spell cards. There are many different types of spells that do a myriad of things, from blocking incoming attacks, to healing damage, to killing your opponent’s creatures, and much more. There are also spells that summon powerful artifacts, conjure mystical enchantments that change the battlefield, and even spells that call upon other powerful Planeswalkers!

The most direct way to defeat your opponent is to attack with your creatures. Once you declare which creatures are attacking, your opponent can decide which of their creatures will block, or if they block at all. Combat ensues, with players casting spells that may change the outcome. When the dust settles, damage is dealt to players and creatures. Some creatures may survive to fight another day, and some may die and enter the graveyard. In the end, you are hopefully one step closer to victory.

How will you block? How will you attack? Do you spend your mana summoning more creatures, or casting spells to destroy your opponent’s creatures? Do you cast a spell early on that changes the tide of combat? Or do you wait to see what your opponent has up their sleeve? Magic’s strategy comes from the endless decisions, traps and surprises that you plan for your opponents. What will you do?

There you have it; a basic introduction into the world of Magic: The Gathering and what is needed to start building a deck of your own. If you are intrigued or would like to get more information on how to start building your own deck and playing for yourself, then head over to the website below where you can find out more information on the hobby. If this is what our readers also enjoy, then we here at AnyButtonGaming are more than happy to write more pieces around this game and other Table Top Games in the future.