Sports game franchises have spent many long years attempting to deliver a ‘spectacle’. With each annual release the likes of Madden NFL receives upgrades in lighting and animation quality, added diversity in crowd reactions and new lines of commentary designed to enhance excitement around every action.

What has always been missing, however, is a genuine sense of narration; the telling of a tale of sporting achievement and the accomplishing of seemingly impossible goals. Humans communicate, instil meaning into activities and make connections with one another through stories.

This reliance on story exists not just in our interpersonal relationships; it exists in our relationship with all things – including sports. It’s the narrative of the game that we love over and above technical details relating to rules, specific player actions or how crisp our TV screen is. 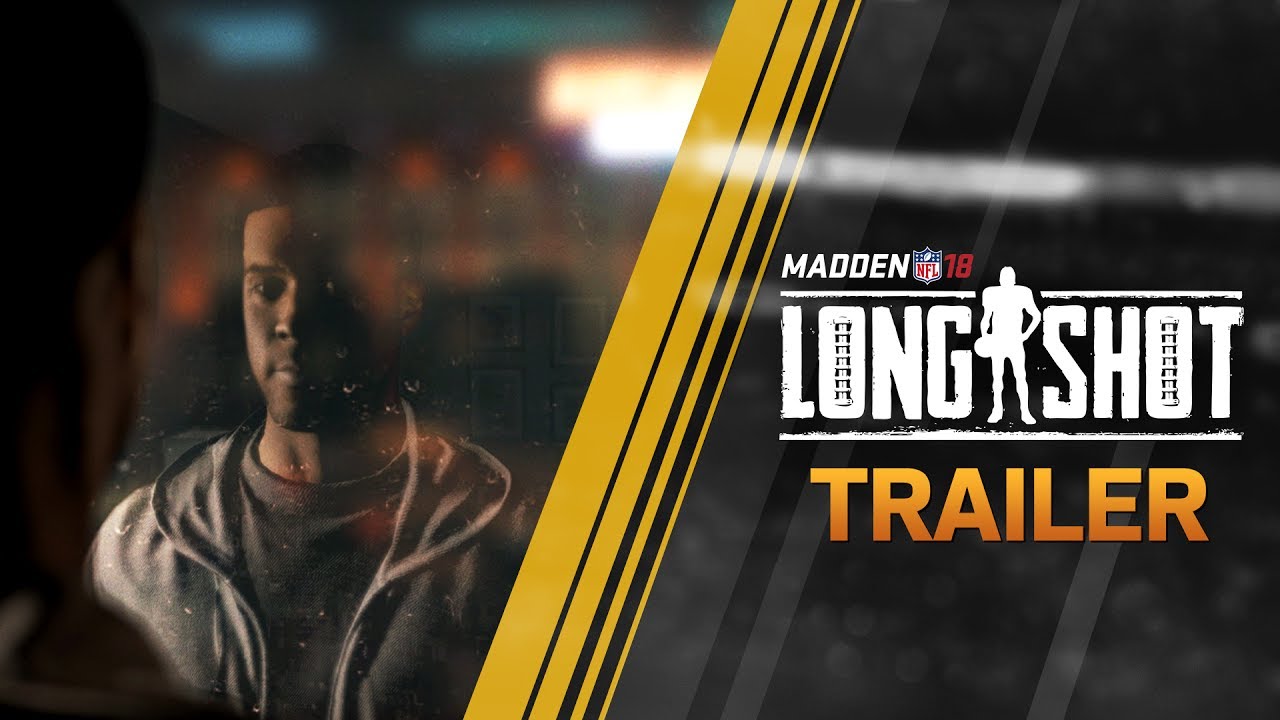 Through the new Longshot mode, similar to FIFA’s successful Journey, Madden NFL is finally embracing the idea that genuine spectacle comes from narrative and not merely from the technical elements.

Longshot sees you take control of Devin Wade, a young hopeful dedicated to making it big in the NFL. It’s an addition of mixed success, but its inclusion goes a long way to expanding a franchise that has become stuck on iterating on the same tired ideas for years. Longshot gives us someone to care about other than ourselves and that alone is enough to draw you into its plot and characters.

Still, the story of Devin Wade is hardly of the quality expected of even the most unloved of Hollywood movies and next year’s inevitable follow-up will need to address a host of issues if Madden fans are going to fully accept an inclusion of this sort.

Wade’s story flip-flops from place to place at a pace that is impossible to keep track of. The difficulty in working out what’s going on isn’t helped by a cast of supporting characters who come and go with extreme rapidity and serve no purpose other than to give Wade a human figure to speak his (stunted) set of emotions at.

Even despite this lack of narrative creativity, though, it’s impossible not to warm to Wade at least a little given that you’re the one in charge of him and it’s your inputs that ultimately make him what he dreams of being. You feel like you’re babysitting a literal baby, but that’s enough to make you care about his future.

SO WHAT ACTUALLY IS NEW?

The on-field action itself feels more grown up, if largely familiar. Animations used for player collisions are greatly improved when it comes to looking realistic in their timing and severity of impact, giving everything from the running game to individual battles between receivers and corners an extra layer of visual polish.

A new mechanic in which you can dictate precisely where you want the quarterback to throw the ball is useful in keeping defenders’ chances of pulling off an interception low, but employing the technique is tough. There’s already a lot going on in a game of Madden and tracking an extra on-field marker with your eyes doesn’t feel natural.

When you manage to pull the move off it’s great, but failure is frequent enough that you’re scared to use it. Practice, practice, practice is the way to overcome failure, of course, but the sheer amount required is going to stop you from playing any other games for a long while.

Indeed, a need to practice more often and with greater vigour is a common theme throughout more of Madden 18’s modes than any game in the franchise thus far. This is aptly demonstrated in the new Madden Ultimate Team Squads option that sees teams of three players square up to one to another.

Co-op has been missing from Madden for some time, and it’s great to see it return – even if it’s somewhat trickier than we remember. You’ve no choice than to remain disciplined in your role if you’ve designs to win the game in a manner that replicates the NFL of reality.

If you’re playing as a receiver, for example, it’s essential that you run the route prescribed for you in the chosen play so as to confuse and/or overload the defence and not give your opponent an easy ride. If two of you are playing the role of receiver then this basic rule becomes doubly important to follow.

It’s somewhat of a shame that co-op is only available within the context of Ultimate Team. Being prevented from reliving a recent game seems a tad mean-spirited and will surely be a point of irritation for players once the NFL season kicks off in September.

Still, that doesn’t stop the co-op option that is included here being one well worth taking time over and being one that is worthy of inclusion. Just make sure you’re playing on a team of players who are ready and willing to play ‘properly’. If you can put together a regular trio to play with regularly then all the better.

In no way is this the perfect American football game, and it’s entirely likely that such a thing will never exist. Despite its faults, Madden 18 does show genuine attempts to push forward on its tried and tested formula in a bid to rejuvenate itself and rejuvenate our love and trust in it.

For the most part this attempt at refreshing itself works. Longshot might be shoddily written and poorly paced, but its protagonist is charming enough to make you care about him. Entertainment in co-op might be limited to only players at the better end of the ability scale, but its inclusion makes you want to aspire to get to that point.

Madden 18 is a game that feels like it cares about you and what you think of it, and that’s more you can say for a lot of annually-released video games.

On the whole an improvement from last years Madden, LONGSHOT mode is a nice addition. But this still has a way to go before it can rival the likes of FIFA for a popular sports title, at least in this country. That being said it has listened to it’s fans on how/what they wanted to see improved in the game.