INK was co-developed by kittehface and Spaceboy and was released on June 19, 2018.  The game provides 1 and 2 player game play options and is a platformer style game.  Similar to other platformer games the purpose is to get from point A to point B to complete the level.   Recently a lot of platformer games have incorporated a unique twist into the design of the game to make it stand out from the rest.  INK does not disappoint in that regard.  The twist in this case is your inability to see the maze until you start “painting” it. 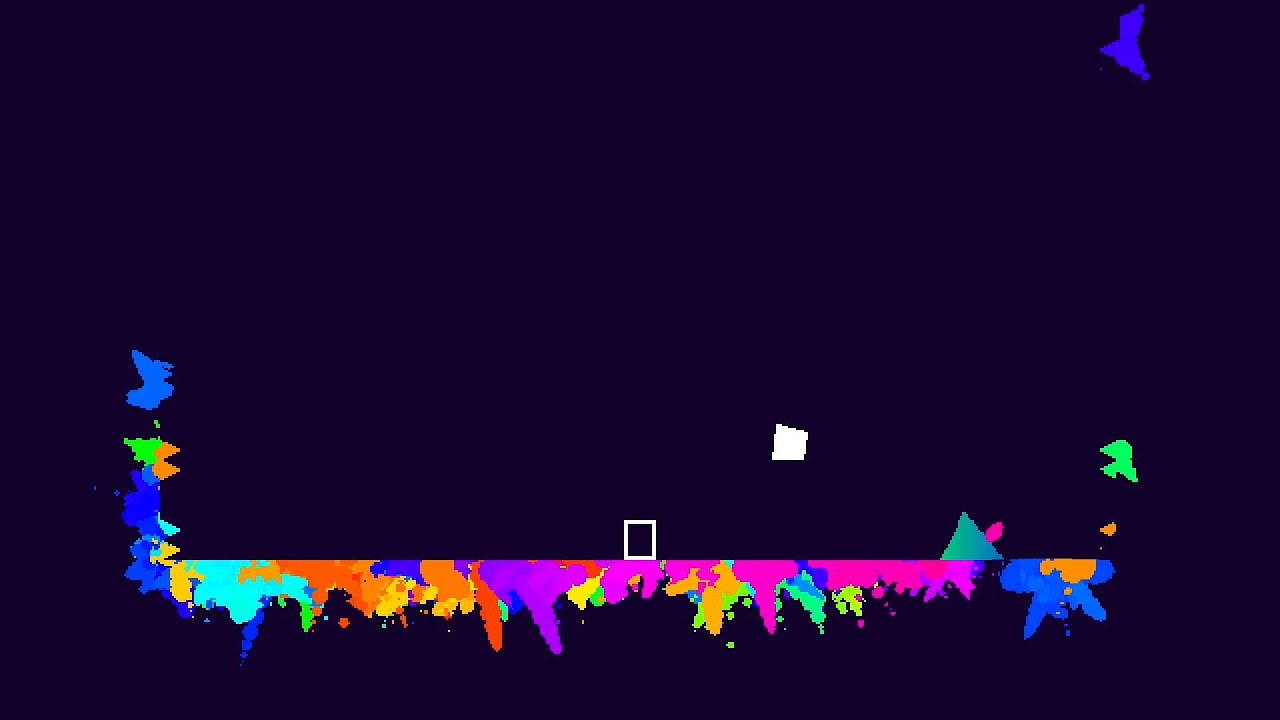 You start out with a completely blank screen with the exception of 2 small squares.  You play one of these squares and your goal is to get to the other.  Your avatar is a small sponge that releases beautiful multicoloured paint as you move and bounce around the map, giving the screen a real cheerful feel.  Any walls or platforms will get painted as you move about and gradually reveal the map.  Your goal is to figure out how to get to the multicoloured square positioned somewhere in the maze.  The music is an original soundtrack by Vincent Rubinetti and does seem to fit with the style of game, however it a bit on the dark side for such a brightly coloured game and it got quite repetitive and annoying so turning it off eventually was the better option.  The music is not something that you will walk away humming.

As you progress through the 75 available levels you will come across pitfalls, like holes in the ground and what I can only describe as enemy sponges.  You have unlimited lives which you will need, as many levels will require you to die often in order to paint enough of the maze to figure out how to get to the end; fortunately when you re-spawn what you already painted remains, however the enemies will return.  As the levels progress you will come across different enemies that will also cause you to die if you don’t land on them in the correct spot.

I would say that there are 2 skills needed to be successful at INK:  precision and perseverance.  Other than that, until you reveal enough of the maze to give you a good idea of how to get to the end, it’s all just guess work and a lot of dying.  Besides feeling like a beginner platformer game for someone wanting to try this type out or for children getting the handle of controllers, for someone looking for a real puzzler of a game this one will surely disappoint.

Nintendo has advertised that players will also be able to “dodge missiles and take down super-challenging bosses” as well as find and collect a small amount of hidden coins.  This reviewer was too bored early on to try and find these hidden gems.  The 2-player mode also supports the use of split Joy-Con play so that you can team up with a friend, which may add a new level of enjoyment.    There is a small price for the game on the Nintendo Switch and it is only available to own digitally.

Overall a very colourful game but not one that managed to keep this player entertained or intrigued.

Overall a colourful game that may hold the interest of beginners to the platformer style of game but not one that would hold a lot of interest for players wanting a challenge.