Okay so it’s time to go over something that has been bugging me ever since I played through a particular sequence in Assassin’s Creed Origins.

SPOILERS AHEAD for anyone who hasn’t played the game yet.

The sequence I’m talking about it is the Main Story Quest “May Amun Walk Beside You”. This quest is what really starts off the main storyline. You travel to Alexandria in search of Bayek’s wife, Aya. She is in hiding because “The Snake” has his men combing the city for her in order to kill her.

You find her hiding place where Aya also reveals that she has been working with Apollodorus the Sicilian and Cleopatra to uncover “The Snake’s” identity. She gives Bayek the first Hidden Blade, which he uses to track down and kill Eudoros, whom he believes to be the “Snake” in a bathhouse.

With Bayek having never seen a weapon like this before and not knowing how it operates, the explanation for it’s existence seems kind of thin and more like a throw away comment. “It’s an ancient blade that killed the tyrant Xerxes. A weapon of justice.” Aya explains before showing Bayek that he has to move his hand down out of the way of the blade. “Ingenious!” Bayek exclaims before saying he will use the blade to kill “The Snake”.

That’s it. Done. No more explanation. 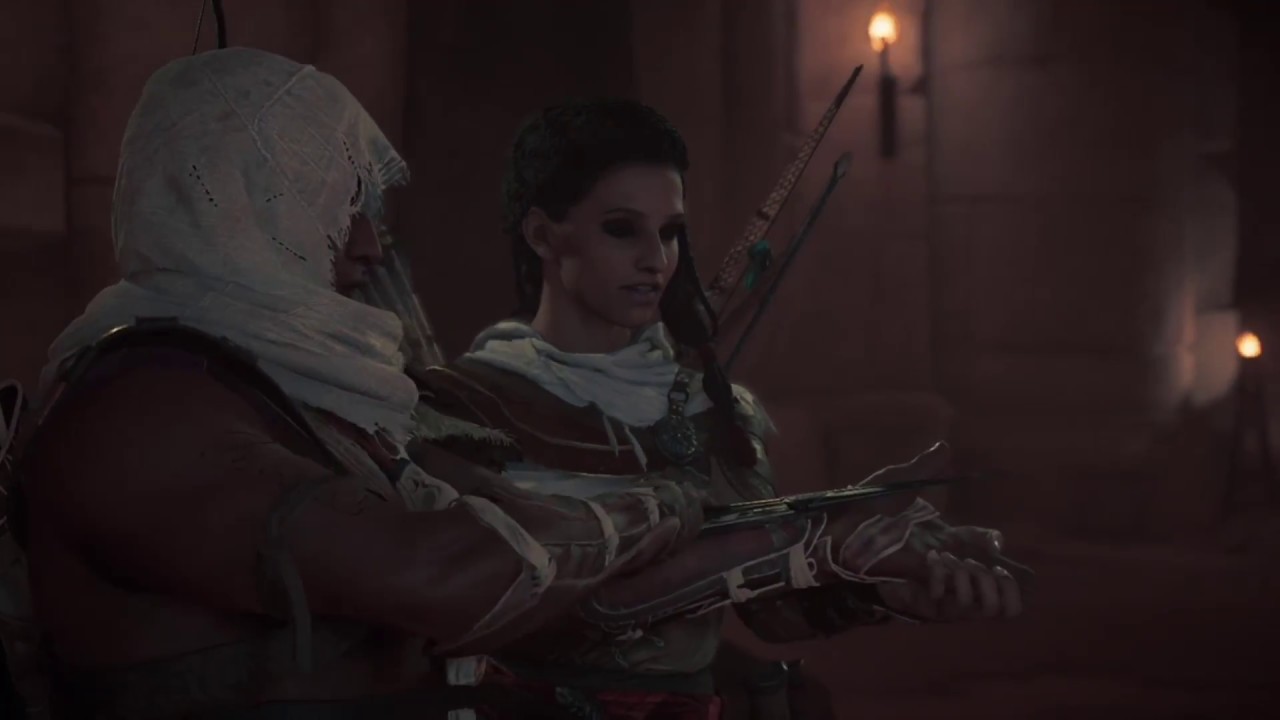 Firstly, my main problem with this was it completely destroyed part of the lore created in both Assassin’s Creed and (possibly the best AC game) Assassin’s Creed II. In the original AC all of the assassins have to sacrifice their ring finger in order to use the hidden blade. In ACII, Leonardo Da Vinci had to customise the broken hidden blade for Ezio so that it did not require his ring finger to be sacrificed.

So why, in the prelude to all of this, do we see that this sacrifice of the ring finger is never actually needed. It removes the emotional attachment from the first two games and negates Da Vinci’s alteration of the blade in ACII. That isn’t to say that Bayek doesn’t lose his ring finger as I will go into now with end of the quest.

Killing Eudoros costs Bayek his left ring finger, cut off from the same hidden blade to kill his target.

It turns out that the “sacrifice” is a complete accident on the part of Bayek as he was shown how to use the blade without hurting himself and got himself into the position where he couldn’t. So, why is this sacrifice needed in future games? If Bayek is the one to set up the Creed then surely he would teach Initiates how to properly wield the hidden blade.
With the hidden blade being such a big part of the Assassin’s Creed series it was disappointing that it was handled this badly. Yes, it could be argued that the game was more focused on the origins of the Creed rather than their weapon of choice, however the weapon has been a mainstay of the entire series.

How I would have managed the first appearance of the hidden blade.

Now I am not an artistic director, merely a fan of the series but with a full team working on the game surely this could have been handled better without glaring plot holes. LOOK TO YOUR SOURCE MATERIAL UBISOFT!

Even if we keep the introduction the same and claim it as an ancient mythical weapon of an assassin that took down Xerxes. All fair and well, let’s keep some mysticism around the hidden blade. Instead of Aya showing Bayek how to use the blade, however, make it so that neither of them know how to use it. The only knowledge they have is that it is mounted on your wrist and that legend says it requires a sacrifice to be used effectively. Bayek swears he will unlock it’s secrets and use it as a weapon of justice once again and take down Egypt’s tyrants. Fast forward to the bathhouse and you can even keep the same cinematic as now it’s not Bayek being an idiot and getting himself into a bad situation. Now, Bayek has figured out what the blade’s sacrifice is and in doing so unlocked the potential of the hidden blade and kept within the lore of the games universe. The blade requires a sacrifice until one of the cleverest men alive (Leonardo Da Vinci) figures out a way to alter the mechanism and forgo this barbarity.

I thank you and good night.