The racing genre has grown from strength to strength over the last decade. Last and current generation consoles have offered almost every type of driving experience you can imagine. From the growth of the simulator with Forza and Gran Turismo to the more arcade, high octane fun with titles such as Burnout Paradise and the Horizon series. It’s without a doubt a tough ground to enter with the bar set high. Which brings us to Gravel. A brand-new racing IP from Milestone. At first glance you may be under the impression this is a new rally game. But you couldn’t be further from the truth. Falling somewhere between arcade racer with elements of sim, Gravel sits mostly on the side of arcade, especially with driving mechanics. But can it bring enough to the table to stop people talking about the Burnout Paradise Remaster? Or should Gravel drive out of our lives into the sunset?

Milestone themselves are somewhat of a racing specialist having created dozens of titles within the genre since the 1990’s. In more recent years you may know then for the WRC or MXGP series, but their catalogue is something to behold.

Upon first starting Gravel, it’s evident that the game wants to lean heavily on the arcade side of racing owing to the set up. You’re a rookie (obviously) and need to work your way through the ranks. The ranks themselves are served in terms of ‘episodes’ of a TV show called ‘Off Road Masters, that feature on the Gravel channel – imaginary TV station for racing fanatics. There’s fifteen core episodes to work through each with three or four races to tackle. And four special episodes where you’re pitted against world class drivers in a certain number of head to head races. The premise is far from original. Split Second definitely got there first but Gravel only just lets you peek into what’s on offer after being flung into your first race.

Starting off you only have access to a set number of cars specific to the race you undertake. As expected, the more you progress the more cars you will unlock. Progression is set in terms of stars for each race within an episode. Max out with all three stars on each race and you’ll soon be unlocking new vehicles. Initially, you may find it easy to gain maximum stars. The first race for instance you do not even need to win, but finish in the top three. But the requirements soon become more challenging once you make it to the third episode. The game is telling you that you should be ready to compete. And largely, you are, having had over half dozen different races to get to grips with the mechanics.

There’s a nice selection of variety on offer within the races themselves. From standard first past the post, to eliminator races which have become much more mainstream over the last decade. One race sees you going solo, trying to get the best time whilst constantly driving through a green arrow which appears in front of you. If you miss the green and hit the red cross, your car will brake suddenly, leading to lost time and an inventible finish further down the leader board.

Tracks are set in numerous locales from the muddy grimes of an off-road stadium to African sands or snowy climates. The handling feels just right for each terrain too, and about what you would expect from a game that portrays itself as part arcade, part sim. The range of cars on offer is never going to match the likes of simulators, but it doesn’t have to with a wealthy range to unlock as you progress for each class of race. Driving the Lancia Delta will no doubt hit you right in the feels if you spent as much time on Sega Rally back in the day as I did.

Online races feature as expected. However, upon testing match-making was sadly lacking in terms of finding other players. Whilst it worked flawlessly, it might be best to arrange matches with friends that may have Gravel to get the best out of the online experience.

Graphically, we’re crossing the path of being outstanding at times, to being rather mediocre. By no means are the visuals bad at all. But some tracks do tend to suffer from lower resolution textures. Especially when you’re going at full speed. Grasses along the tracks just look a bit drab. But in contrast, certain tracks look and feel really pleasing to the eye. Scenery can be driven through in parts, which loses its feel. Whereas on different tracks, the same barrier will be solid.

The sounds are about what you would expect from a racing game. They’re adequate in nature. And cars sound ok. Nothing outstanding but nothing to complain about. What you may find annoying, and this is of course personal preference, is the overall commentator in the Off-Road Masters career mode. It’s a trivial aspect to pick out, but the voiceover is with you on your journey and I didn’t find it a fitting accent or feel the passion from the voice actor for the game ahead.

Gravel offers a long road ahead to unlock all cars and collect all 180 stars from the arcade mode. The AI is quite competitive on medium alone, but this can be lowered or increased to suit your skill and play-style. You can tweak weather and the time of day also which really does give a new dimension to tracks. Thunder and lightning in the dark? Be prepared to take it steady or lose. 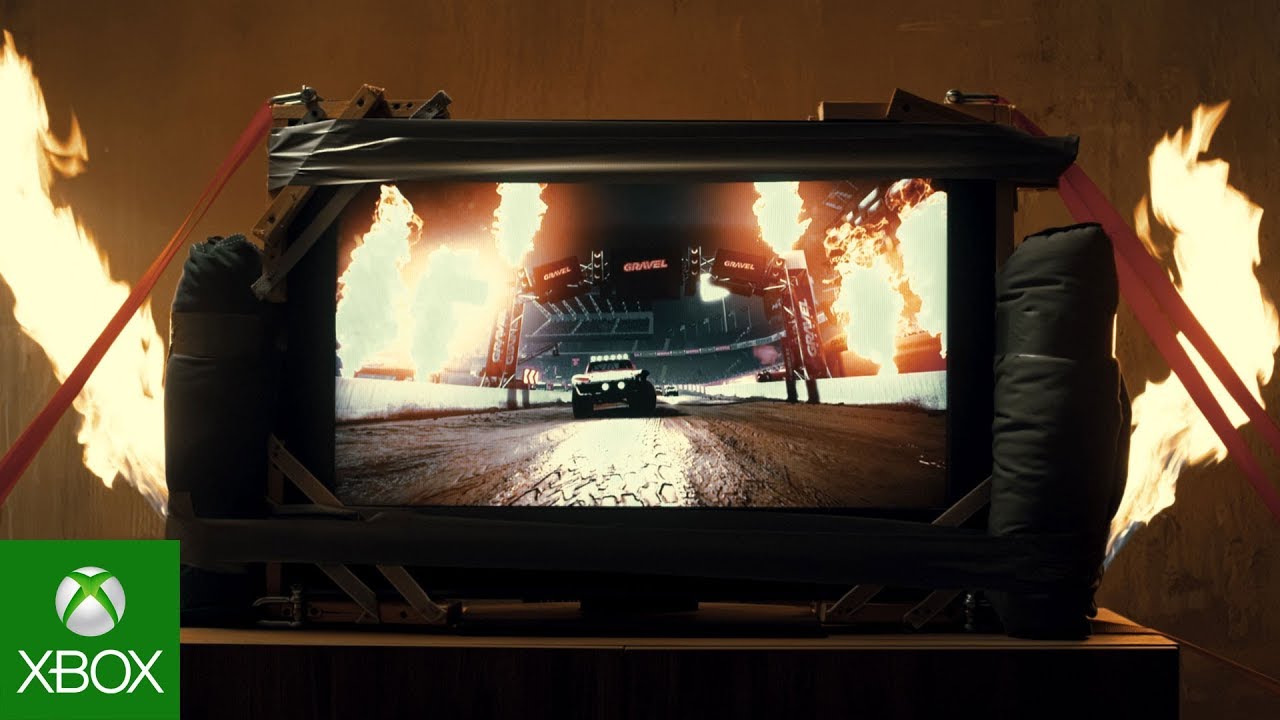 Milestone have kind of made a milestone with Gravel. After the dozens of racers they have released over the last 20+ years, none really standout to elevate the developer to the heights of Criterion for example. And the sad news is, whilst Gravel should, it likely won’t. What you have is an excellent package of tracks and racing on offer. It’s immensely fun and has had a lot of care carved into its development. It may not have the open worlds of titles such as Horizon, but it has its own charm. Not one to be missed if you’re a fan of the arcade racer.

Gravel is available now from the Xbox Store, priced £44.99 and all good retailers on physical disc. Also available on PS4 and PC.

Gravel dishes up a series of solid, arcade style racing that feels good to play, and great to drive. Whilst nothing is particularly new, the tried and tested formula delivers us fun. And that’s what gaming is about, isn’t it? Recommended.