Skara: The Blade Remains, developed by 8 Bit Studio is being promoted as a community-drivenMOV (Multiplayer Online and Versus) game powered by Unreal Engine 4. First impressions of the  preview videos had me very intrigued and excited to try it out.. This game is considered a battle arena style game and has a historical look to the characters and environments.   As a player who enjoys this type of game play ,I couldn’t wait to try it out. 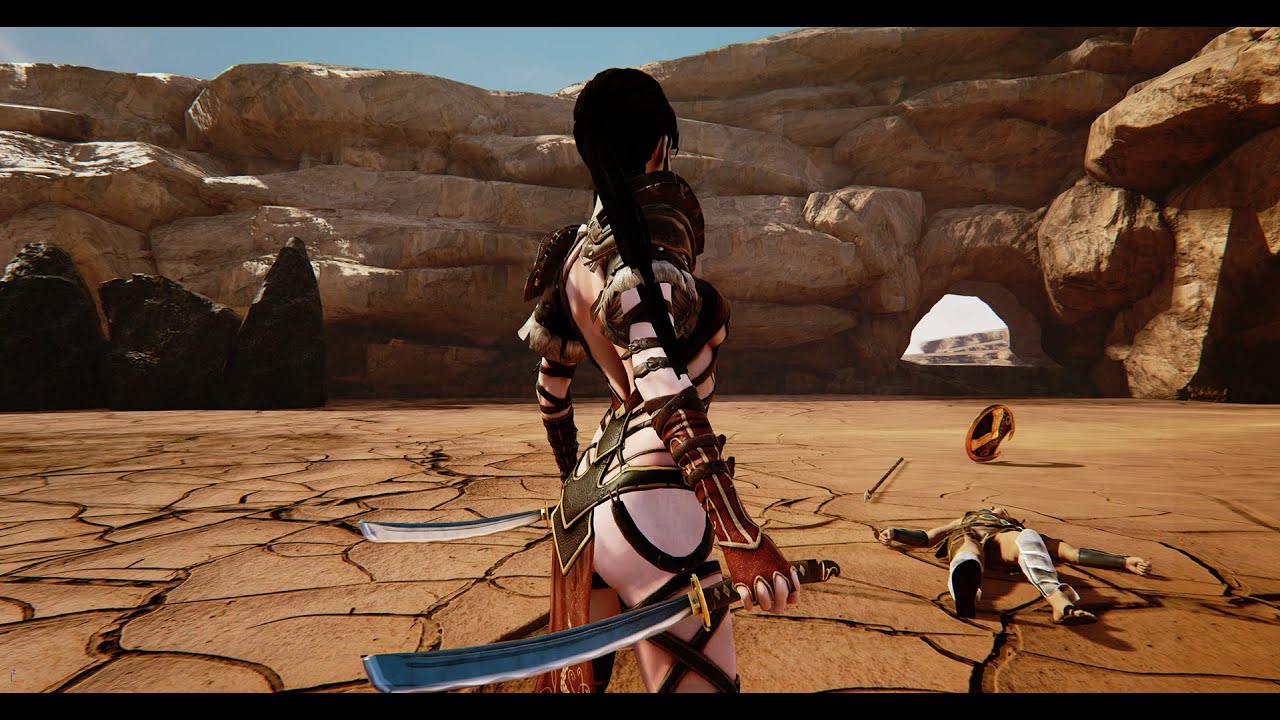 Like many games in this style the environment plays a role in the battle, with Skara there are many different battle areas, some with fire some with ice and others in the desert.  As a player, you will need to change battle strategies depending on the environment.  According to information on the game, there are 5 characters to choose from with each having it’s own strength, speed and movements.

The game was put on steam in 2014 as early access and remains that way today.   In June 2018 it was announced on steam that Open Beta 0.2 was live and ready for players to try out the latest updates.

When first entering the game you are met with a main screen that invites you to join the discord server and gives you options like News, Play, Armory, Quests and a Shop.  I liked the idea that the discord server was announced on the home screen as this helps to give it a sense of community from the beginning, but I later found out that the community is starting to diminish.

From the main menu , the next stop was training in order to master the combat style.  Graphically the game is well done and the character I played felt a part of the environment.  The music , on the other hand,was a bit fast paced and felt stressful.  It was definitely music that fits at the peak time of a battle or in other games when you reach the boss, but didn’t really fit at the main screen.  Once I got past the glitch that caused a delay with my ability to move, for some reason it thought I was console instead of PC, I found the combat style well done but relatively easy to pick up with limited commands.   You do have the ability to change the keyboard setting, which is good as some of the default commands are in a strange position.

There are 2 modes in the training section, however at this time only the basic tutorial was available.  The first 2 opponents in the training take you step by step through the commands and the combat moves.   The last 2 opponents let you try the combat for yourself.  Unfortunately there is only one character that you get to play during training so you don’t get to try out the other characters before doing a battle.  Once you complete the initial training you are invited to enter the coliseum.  It’s possible that the coliseum is the more advanced training but I couldn’t confirm that as the game took me back to the home screen.

In this beta the competitions that are available are Last Team Standing (3v3) or Brawls (Duels).  In Brawls there is an option to customize a match, however that option is also not available at the start.  Unfortunately that is where my luck stopped.  I spent way too much time trying to get into a brawl that after a long wait and then getting a message that there were no servers available I finally gave up.   From the comments on Steam I wasn’t the only one having trouble.  Those that managed to get into a match were often booted out mid-way through the brawl.

Looking around the rest of the game, you can tell that it is still under construction as there is an area for news and other type of information but there is nothing there yet.

Even with all the problems I had during the open beta I still think the game has real potential, it just needs to be finished and the servers improved.  We know from other games that have lost fan base due to poor servers that it’s difficult to build that back up once it’s gone so they need to work fast on correcting the servers.  It’s been 4 years since it was first put on Steam and unfortunately if it’s not completed soon; with the difficulty, everyone is having even participating in the beta, potential fans will lose patience and interest.  I like the idea that they are considering feedback from the community to build the game, however ,there has to be a limit to how long they remain in open beta before launching the full game.

Have you tried Skara:The Blade Remains?  What do you think of it so far?  Let us know in the comments below.