Pixel art 2D games have become a lot more mainstream in both the console and PC indie scene over the past couple of years. One of the latest to hit the Xbox One is Dream Break. From developers AIST, it’s evident that much inspiration was taken from 16-Bit classics Another World and Flashback. But can Dream Break fall into the modern classic category? Or is this more of a nightmare?

You take on the role of Eugene in the post cold war USSR, albeit an alternate reality to that of real events where the world is driven by propaganda and has become heavily policed. Eugene is just your average everyday guy who works as a janitor to scrape a living. Almost without reason, you’re soon involved in a resistance against the regime and find yourself on the run as you work in a bid to take down the almighty ruler, GenSec.

Dream Break falls into the adventure/puzzle genre with some platforming thrown into the mix as you make your way through the gaming world. The world itself is quite compact in the sense of solving problems or finding items required to move forward. You won’t have to venture too far to find what you need. The game itself utilises orange objects as a way pointing out what you can and cannot interact with which keeps mechanics simplistic in their nature.

In terms of puzzles, the handful that present themselves mainly revolve around connecting pipes or electric cables from one end to another by rotating required pieces. This is overly simplistic but yet still enjoyable to an extent. Few clues are given as toy what you need to do but working it out is the classic way to go about your 2D adventure business.

A short way into the game you’ll acquire a gun and shield. But don’t wet yourself with excitement as the majority of these scenes are executed in a dull, tedious and repetitive nature with only a fast reaction needed to succeed. And Dream Break doesn’t improve there. The controls are cumbersome. Simply pressing left or right can cause Eugene to stop and look around when you should be moving. This can become tiresome early on and ultimately lead to the experience being ruined.

There’s a couple of vehicle sections in the game which take on more of a Space Invaders type feel to them and work surprisingly a lot better than expected.

One of the stronger aspects of the game is its soundtrack. Coupled with the story itself, these two alone can keep you playing as you want to find out what is going on, with a musical backdrop that seems to fit the mood just right in every scene.

But this doesn’t make up for Dream Break’s shortcomings overall. The game can be completed, and with all achievements in around 2 hours on a first play through. Afterwards there’s no desire to return for a second run. It’s both a feeling of relief it’s over, frustration and to a slight extent, satisfaction. 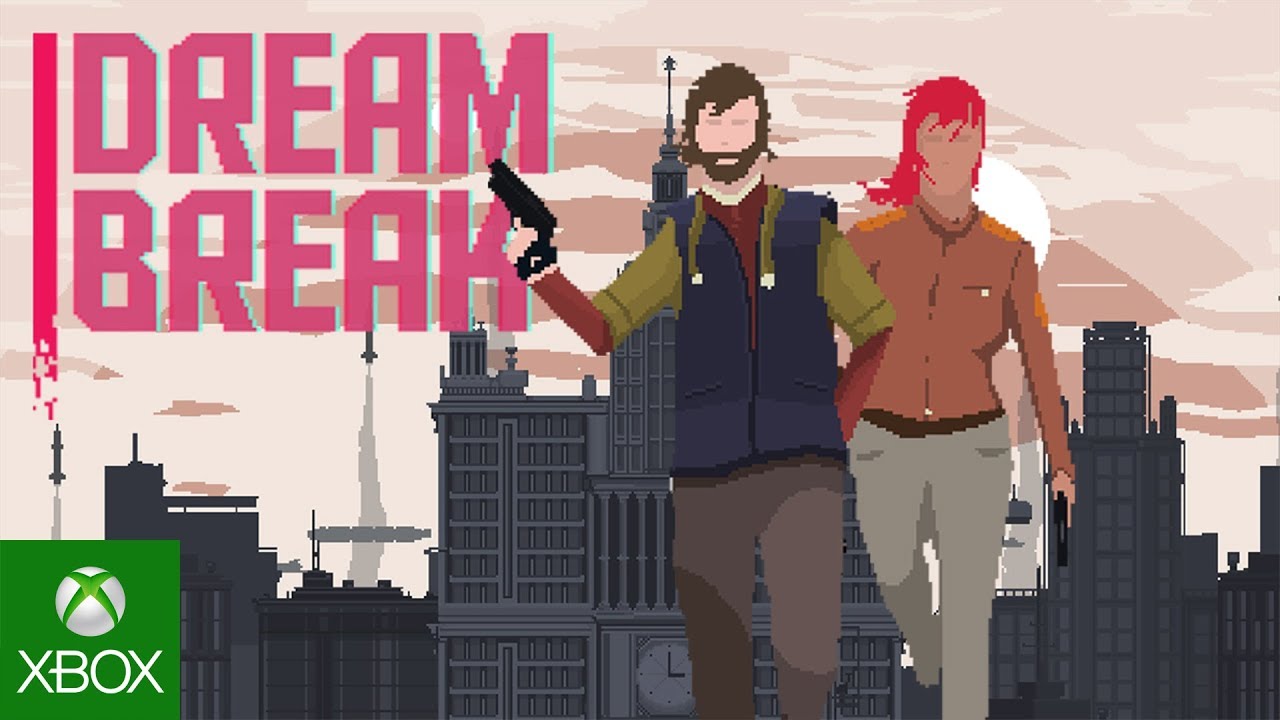 AIST have tried to create something great using the blueprints from 25 years ago. However, the execution is half-hearted, with no inspiration to return. Yet there can be a strange compulsion to play on till the end. Dream Break is by no means a classic, and without question offers up a nightmare or two in terms of controls and playability. If you’re a hardcore, pixel 2D adventure fan, the story will keep you entertained for the average length of a movie. Otherwise, Dream Break falls into the category of average.

Dream Break is available now on Xbox One, PS4 and PC (Xbox One Reviewed)

Good games need good gameplay. Something which is not evident here. And whilst Dream Break offers up a compelling story, those that see it through to the end may still feel short changed.