You’re on the Death Road to Canada in a clapped-out car. The survivors that set out on the journey eight days ago are long dead, as are all the humans you picked up along the way. A dog is driving, and there are 500 zombies tracking Fido down.

Never has the zombie apocalypse been so full of personality clashes, dysfunctional jerks, tantrums, or bickering. Not even that series of The Walking Dead which was just some people arguing in a forest near some zombies.

Developer Rocketcat Games (in collaboration with Madgarden) offers you Death Road to Canada. Yes, you could survive the good old ZA. But with these idiots for company, do you really want to?

If you’ve had your fill of roguelikes and permadeath, you might want to stop reading now. But that would be a mistake; Death Road to Canada is more charming and more humorous than many of its stablemates, and no other game will teach you what it would be like to drive from Florida to Ontario surrounded by the biggest jerks you have ever met.

It’s a journey that will take you a full fourteen days. And to make it, you’ll need to be cunning, careful, smart and vicious. And even then, you’ll fail, because you’ll need a huge slice of luck, too. Games may have taught us that the zombie apocalypse is survivable with nothing but a shotgun and a macho attitude. Death Road to Canada will quickly persuade you otherwise.

Failure is certain. Success is far from guaranteed – in fact you may never reach your destination, no matter how tenacious you are. But, as in life, it’s the journey that counts, and the various, hilarious, ways that you’ll fail. But you’ll renew and refresh each time, confident that *this* is the time you’ll make it. Oh, how the game laughs at such bravado.

In common with any survival scenario, you’ll need to rummage through abandoned locations in search of the supplies you’ll need to live just a little longer. Food, weapons, medical supplies, ammunition, fuel for your car. You start with two survivors, and as you progress you’ll be able to recruit up to two more. As long as you have one team member alive, there’s hope. However false that hope ultimately turns out to be.

Scavenging forms one half of the game; and you’ll face hordes – and we do mean hordes – of zombies as you loot weird and wonderful locations. Melee weapons are plentiful but many will break, and you’ll get tired swinging them around. Guns of course allow destruction from a little further from harm’s way, but ammunition can be scarce. Save the violence for when you’re stuck and try to skirt round the slow moving but numerous dead.

Every survivor you encounter, and every zombie for that matter, is rendered in gorgeous pixel art and is chock full of charm and personality.

Every character you meet will bring their own attributes to the group. And not all the attributes will be positive. You’ll need to understand just what makes each survivor tick if you want to make the right decisions. And there will be a lot of decisions to make.

[mks_pullquote align=”right” width=”300″ size=”24″ bg_color=”#000000″ txt_color=”#ffffff”]”Death Road to Canada makes the exceedingly tough survival roguelike The Flame in the Flood look like a paddle ’round the local boating pond.”[/mks_pullquote]Conclude your scavenging without getting trapped by zombies and return to your car to set off on your way. You might be expecting a serene journey to your next scavenging destination, but instead you’ll be faced with screeds of text and difficult decisions to make. This element of the road trip you’re on is pure interactive fiction, and it’s wonderfully written, witty, smart, surprising and – quite often – journey ruining. Make the wrong decision in what often seem ridiculous but harmless scenarios and you can easily lose a team member before you can blink. And the scenarios are so varied that you’ll rarely – if ever – encounter the same one more than once. There’s no ‘safe’ set of decision you can follow, and the roguelike nature of the game means you’re facing a whole new adventure every time.

Often there’s no clear right answer, or even no obvious least-worst option either. Sometimes the characteristics of your surviving group simply don’t mesh with the scenario you face. Cue a bad outcome, and probably a death to boot. This game is aptly named for sure.

If ever there was a genre that’s not for everyone, then it’s the roguelike. And if ever was there a game that’s not for everyone, then it’s Death Road to Canada. It’s a game where, no matter how well you’re playing and how strong the team that you’ve assembled is, can kick you where it hurts and leave you a teary, wheezing mess at the side of the road. If you’re not willing to pick yourself up and get moving, again, and again, and again, then this game will frustrate no end.

The key to enjoying Death Road, then, is to relax about reaching your destination, and just enjoy the hilariously written and absurd journey you’re on. If you can’t deal with what looks like a solid attempt fall to pieces in an instant, through a single wrong decision that sets in motion a rapidly spiralling chain of events, then Death Road to Canada is not the game for you.

But if you’re looking for a charming game that remains chirpy and upbeat even as you’re heading towards your certain demise, and you’re able to keep your frustration at bay when the zombie apocalypse goes from hash to harshly impossible, then give it a go. 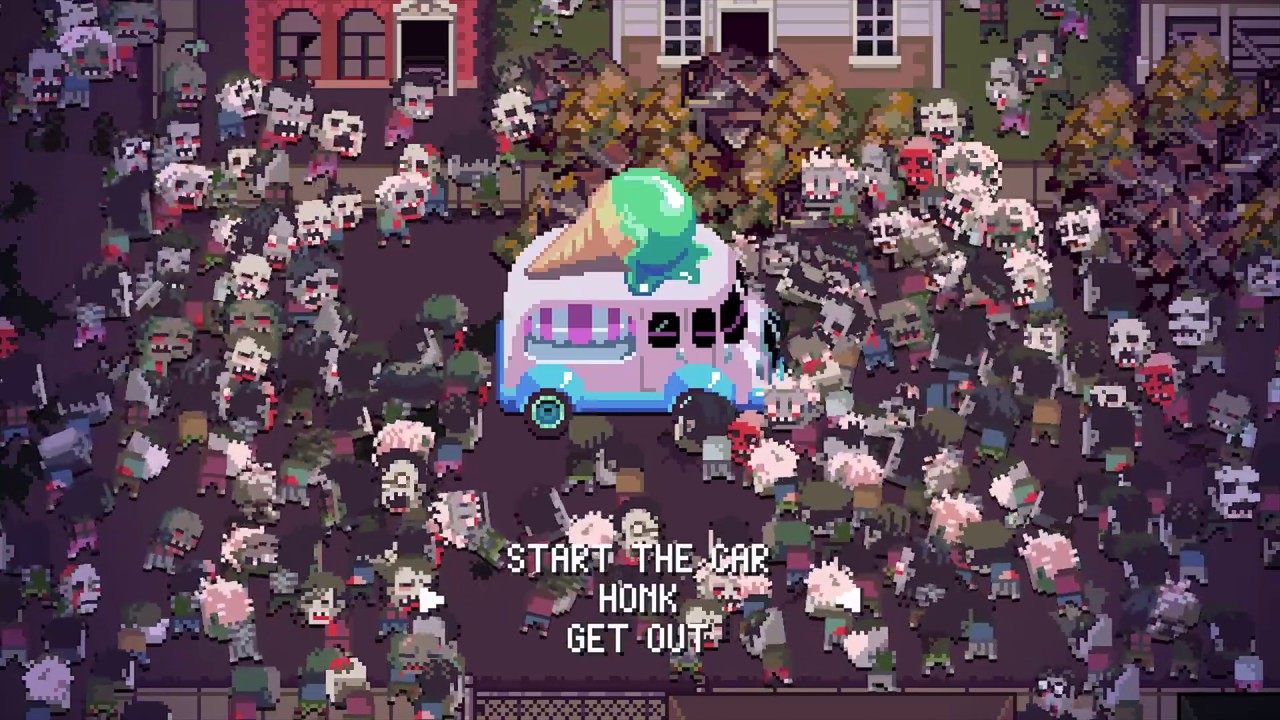 The Zombie Apocalypse was never funnier - or tougher.

It’s difficult to recommend a game that treats its players as harshly as Death Road to Canada. If all you care about is ‘beating’ the games you play, and are not blessed with the patience of a saint, then you’ll want to steer well clear. Death Road to Canada makes the exceedingly tough survival roguelike The Flame in the Flood look like a paddle ’round the local boating pond.

But if roguelikes are your thing, permadeath doesn’t scare you, and you’re in it for the journey, and the laughs, then Death Road to Canada will justify its place in your library.