Bleed is a blast.

Bootdisk Revolution’s action platformer finally lands on Nintendo Switch, some three-and-a-half years after it first appeared on Xbox 360, courtesy of the much-missed Xbox Live Indie Games programme, and it’s a fine way to start 2018. Don’t let the game’s apparent age fool you – Bleed’s classic gameplay (with a few twists) and vibrant 2D pixel aesthetic makes it an ageless joy. Like Anna Kendrick, but with guns.

Protagonist Wryn can run (check), jump (check), double jump (check), triple jump (check), dash (check), shoot in every direction (check) and slow down time (che… wait, what?) A pull of a trigger slows down time to a crawl, as a diminishing bar shows the depletion of Wryn’s time-bending powers. With jump on the other trigger, and movement and shooting on the analogue sticks, twin-stick-style, it doesn’t take long before Wryn’s acrobatics are worthy of the greatest hero in video games.

Which is useful, as that’s the aim of our purple-haired heroine. She’s not the self-deprecating kind of hero, oh no. She’s the kind of hero that does it purely for the adoration of a grateful public. Wryn’s self-imposed task is to eliminate the six once-greatest-of-all-time heroes who have turned bad.

There’s no messing with Wryn, and no messing with this game. Forget about not shooting constantly. There’s always something to kill, always something that’s trying to kill you. Bleed’s hell-bent on giving you something to shoot at, and every beastie blasted draws you forward at breakneck speed. Never stop, never back down, die, die, and die again, only to come back more determined than ever to reach the game’s conclusion.

[mks_pullquote align=”right” width=”300″ size=”24″ bg_color=”#000000″ txt_color=”#f2f2f2″]Embrace your inner methamphetamine-powered homicidal gymnast and let loose.[/mks_pullquote]Which, if you are at least moderately skilled, won’t take that log. Levels may be action packed and bosses – the former heroes Wryn’s on a mission to defeat – are impressive in both scale and ferocity, but you’ll have blasted your way through in just a few hours.

I… took a little longer (again giving the opportunity for @DomosaurXX to once again call out my lack of hand-eye co-ordination, and tell me I’m too old); in places Bleed delivered Cuphead-levels of frustration. But you’ll never quit, because you’re having too much fun.

Bleed is a game that rewards rhythm and risk – forget trying to pick your way through levels, methodically eliminating waves of enemies. That just won’t wash. Embrace your inner methamphetamine-powered homicidal gymnast and let loose, using every nimble trick in Wryn’s playbook – triple- and wall-jumping around the play space unleashing a deadly cascade of firepower from whichever weapon Wryn’s picked up along the way (throughout our favourite remained the dual pistols) and dashing past all manner of deadly traps. It’s only when you embrace this no-holds approach fully do you appreciate just how balanced the movement and shooting is, and that both are handled so deftly that the controller with its initially-strange button configuration quickly becomes an extension of your thoughts.

When things get really hairy, though, you’ll fall back on Wryn’s neatest trick of all – slowing time. Careful use of this scarce resource is advised, but deployed appropriately it can be the edge you need to make a flawless run of defeat a boss. And it makes you feel like a true badass.

And, when you complete that final level, you’ll want more badassery. Bleed doesn’t let you down, with decent replay value through harder modes offering an even greater challenge. You’ll need to max out Wryn’s weaponry, though, if you want to have any chance of making through the game on tougher settings, with more on screen baddies with varying attack patterns, so be prepared to churn a handful of hours into Bleed if you want to see everything it has to offer.

We’ll say it again. Bleed is a blast. 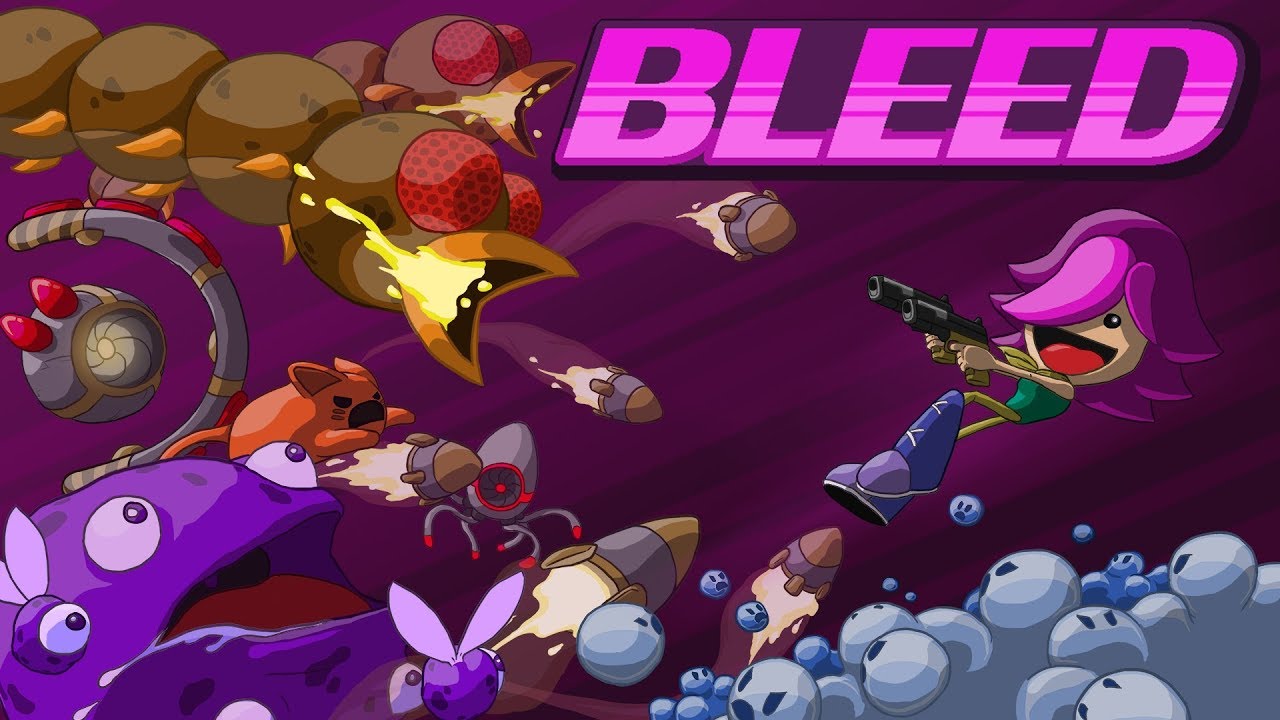 It’s really hard not to fall for Bleed’s charms. Sure, it’s not a long game, but every second is packed with visual punch and a dozen things to shoot. Above all, it just feels great to play, with movement and controls honed to perfection.

The only thing we can say about Bleed is, “more, please!”