Sequel to – you guessed it – Bleed, Bleed 2 offers more of the same pixel-perfect run n’ gun shooting, with a twist. Developer Bootdisk Revolution has packed a huge amount into this tiny, perfectly formed package.

Bleed 2 is an intense, furious experience. Pink-haired protagonist Wrynn returns from the first game, her task to cement her position as the world’s only-remaining hero by defending the planet from an invading force of aliens. That’s all the story you need, really. You don’t need to play the first game to makes sense of any of this – though we think you should.

Wrynn is every inch the greatest hero of all time. She can run, jump, double jump, triple jump, air-dash, shoot, slow time and even reflect enemy projectiles using her katana. And she’ll need all of those skills from the get-go as the screen rapidly fills up with flaming, flying death.

She’s a speedy, agile protagonist, able to sprint and leap from one side of the screen to the other in seconds. Jump is bound to the right trigger (with full 360 degree field of fire on the right stick, a la twin stick shooters) while Wrynn’s slow time ability is on the left. This is a useful – though finite – resource that’s best employed whenever things get too hectic, which is often. Rounding out Wrynn’s move set is a katana slash, used to reflect certain projectiles back at the screen-filling enemies. This is bound to the right bumper.

It’s a well-thought-through control scheme which allows Wynn’s full range of abilities to be accessed without ever having to move thumbs from sticks. This is vital; there shouldn’t be a moment in the whole game when you’re not moving or shooting.

This is important. Remember when we said Bleed 2 was intense? Don’t. Stop. Shooting. Relief will come in the form of amusingly-animated cut scenes ,styled as news bulletins, between each of the game’s seven levels, but that will be your only respite. We’re serious – the pace is breathlessand you’ll need to master every aspect of Wrynn’s abilities on your journey.

And that’s even before you’ve encountered the boss fights. Boot disk Revolution has crammed 25 boss fights into the seven levels of Bleed 2 – at pace you’ll be running headlong into a boss fight every two or three minutes. They’re impressive, too – with some truly difficult attack patterns to recognise and react to.

This all sounds as you would expect; a pixel shooter that demands lightning reflexes and nerves of steel. And, certainly, those help, but Bleed 2 is far more accessible that you might expect. A generous health bar – on normal difficulty, at least – and short but action-packed levels mean that even the most ham-fisted amongst us can bash our way through with a little perseverance and a willingness to abuse infinite continues and the generously-spaced checkpoints.

The challenge in Bleed 2, though, is not just to complete the game, but to do it in style. The game doles out a performance rating at the end of every encounter and if you want to climb out of the mediocrity of a D-grade each time you’ll need to hone your skills. This is Bleed 2’s true identify – a game that lets you see most of what it has to offer but urges and expects you to do better. Flawless runs will take practice and patience.

All this shootery perfection is wrapped up in a gorgeous homage to pixel artwork of the nineties, and a thumping genre soundtrack that urges you along without ever getting annoying. There’s a whole host of options, too, from a range of difficulty options to challenge, endless and arcade modes, and unlockable weapons and characters. The two-player couch co-op mode is an absolute blast and, arguably, it’s where Bleed 2 really stands out. With each player able to reflect projectiles of a certain kind based on their colour, there’s an Ikaruga-flavour to proceedings.

Bleed was a blast. Bleed 2 is every bit the sequel the first game deserves. It’s a masterpiece. 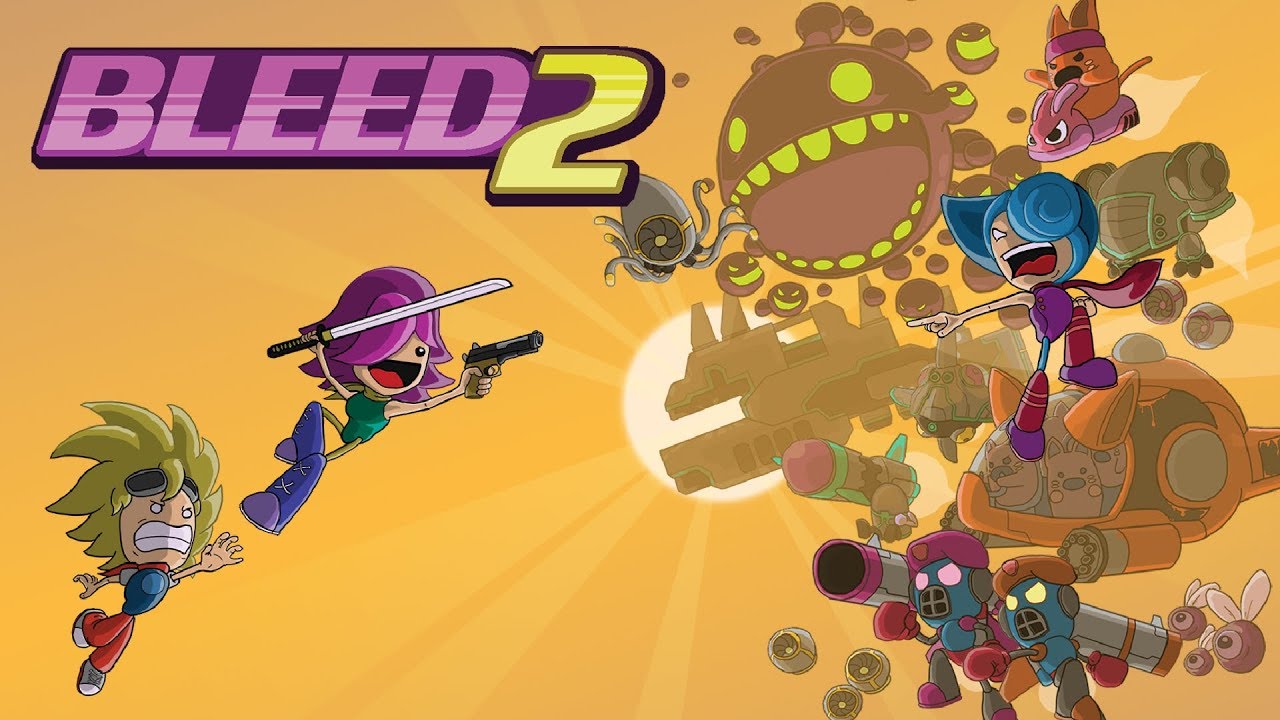 Bleed 2 is that rarest of gems – an accessible shooter that encourages improvement more than it punishes failure. You can sit down and blast through with a friend, or you can dedicate hours into mastering every aspect of the game. Controls are balanced beautifully and the game positively begs you to invest time in it.

Bleed was great. Bleed 2 is a masterpiece.