Baseball Riot is a physics-based puzzling bouncer-game – think Angry Birds and you’re in the right area, though think Tennis in the Face and you’re looking at Baseball Riot’s identical twin.

Meet Gabe Carpaccio, a washed up baseball star pro hell-bent on exacting revenge upon the manufacturer of energy drink Explodz. As usual, 10tons has done a brilliant job of setting up a humorous back story and amusing characters for a game that probably doesn’t need either. This care extends to the presentation, which is almost flawless, and the controls, which are as simple and as slick as you could hope for, employing either joy-cons or touch screen.

It’s everything we expect – but everything we have seen before. Elephant in the room time: Baseball Riot feels in every way like a re-skin of the, admittedly excellent, Tennis in the Face.

[mks_pullquote align=”right” width=”300″ size=”24″ bg_color=”#000000″ txt_color=”#ffffff”]”It’s not trying to be Citizen Kane. It just wants to be a fun romp.”[/mks_pullquote]If you have played – or own – Tennis in the Face on Switch or any other platform, then you know exactly what you’re getting into here. We mean exactly. But if you haven’t experienced that game, then there’s lots to love about Baseball Riot.

Baseball Riot is simple – aim your shot using the visible aiming line and take a big swing at the baseball with Gabe’s bat. Your shot will carom around the level, knocking over the bad guys, collecting stars, and causing cans of Explodz – the in-game and utterly believable energy drink – to, well, explode. Gabe’s task is to knock out all the bad guys in as few shots as possible, with bonus points for collecting the stars along the way. Gabe has a limited ball supply (snigger) but taking out three baddies in a single shot will reward him with an extra ball (snigger).

As you progress through the world map, filled with over 100 levels of bouncing mayhem and exploding Explodz, levels become more complicated, enemies become tougher and more varied, and the challenge increases.

Not by much, though. Even the toughest levels are well within any player’s ability – if clever planning and execution isn’t working, there’s always good old fashioned trial and error. In truth, though, each level is a mini journey, inviting experimentation with crazy shots, witnessing the results, and then refining your approach to improve each attempt.

Baseball Riot is, frankly, a riot. With a mobile game at its roots – and we’re a broad church at AB Gaming, so we’re fine with that – it stands testament to rock solid design and execution that Baseball Riot is as much of a joy on the couch and big screen as it is in the queue at the Post Office.

If you own Tennis in the Face you probably don’t need Baseball Riot – it’s virtually the same game. So we would not recommend owning both… but, having played Tennis in the Face to death over a year ago and completed every challenge that game had to offer, we were immediately eager to do exactly the same with Baseball Riot. It perhaps helps to think of Baseball Riot as an expansion pack – same style, same mechanics, over a hundred new levels to battle through.

Actually, what the hell. Both games are great value. Get them both. 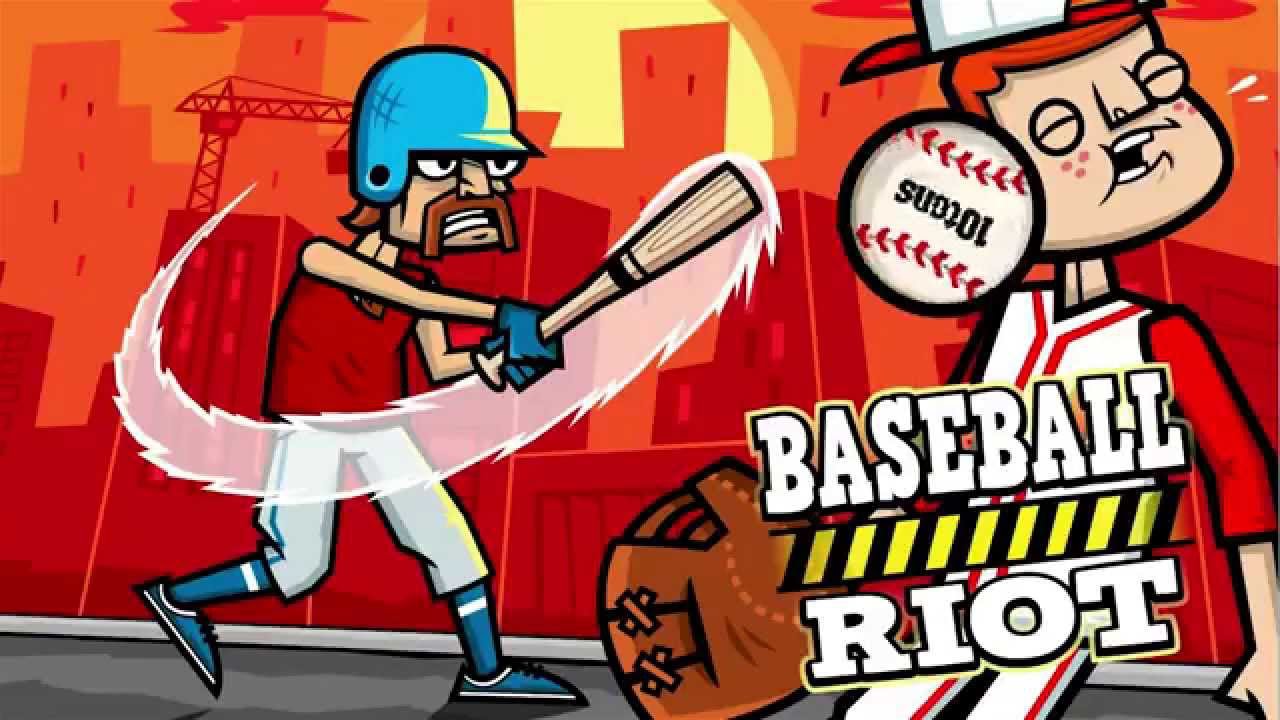 More of the same from 10tons. And that's no bad thing.

We love Baseball Riot every bit as much as we loved Tennis in the Face. It sets out to make hitting people in the face with balls (snigger) fun and enjoyable, and achieves it. It’s another perfect example of a simple premise executed flawlessly and with bucket-loads of style.

It’s not trying to be Citizen Kane. It just wants to be a fun romp, and it is.

And it’s only four quid. Buy it. Oh, and Tennis in the Face, too.