Top 5 Cozy Games From 2022 Worth Playing

Imagine you are a WWII ace fighter pilot.  Next, imagine you and your 3 closest friends have been asked to join in the fight against top Axis agents. Now imagine you are in the 1990’s in an arcade playing a flying shooter style game.  That is the essence of Aces of the Luftwaffe – Squadron.

Released July 24, 2018, the game is reminiscent of the flying games from the 80’s with the vertical scrolling screen, patterned enemies and levels that end with giant bosses.  The developers, Handy Games, did add a few modern twists to the game.

You play Mark (Ace) Taylor the leader of a group of 4 WWII fighter pilots.  Each member of your team has different abilities that enhance your team’s skills.  The team also has some interesting obstacles to overcome within themselves.  For example, Steve Davis, one of the wing-men has a tendency of falling asleep; Mark Taylor occasionally becomes sick causing the team to have to move slowly.

While shooting and dodging your enemies fire, you collect medals.  If you are a person who likes to get large scores instead of just completing the level, you will like these as the more medals you collect the larger your score.  Occasionally, you will also collect what I like to call the ultimate medals.  These are used to help add powers to your characters.  This is where the game differs from the retro versions.  Not only do you have the ability to upgrade your own skills.  You also have the ability to upgrade those of your team.  As you progress through the levels, the bosses get more difficult and the bullets really start to fly so upgrading will come in handy.

With Aces of the Luftwaffe, you have the ability to play single player or co-op.  In co-op mode, you can have up to 4 players.  Interestingly enough the co-op version is not a separate game from the single player.  Any levels unlocked in single player will already be unlocked in co-op.  With co-op play, the primary player always plays Mark (Ace), Taylor.  The remaining players have the option to choose any of the remaining team members.

The game is visually better than it’s predecessors.  The humour of the characters is enjoyable.  The twists thrown at you help to increase the challenge, although they do become repetitive.  An interesting feature was the 5 planes and your dead aspect.  Unlike a lot of games today, your round ends if you use up all 5 planes.   This feature also contributed to the retro feel of the game. No need to worry though, you can always restart the level.  You are also able to repeat any levels you have already unlocked.

Overall it is an enjoyable game to play and a nice walk down memory lane.  Not a lot of skill is required to complete the majority of the levels.  There are only 5 chapters with 5 parts to each chapter so most players will probably have it finished in a short period of time.    Is the game worth getting?  Yes, if you want something that won’t give you a lot of challenge but will help to pass the time.  Due to the ability to upgrade your team and purchase planes, the developers obviously hope players will replay to earn more medals.  Hopefully, the developers will come out with additional chapters as well. 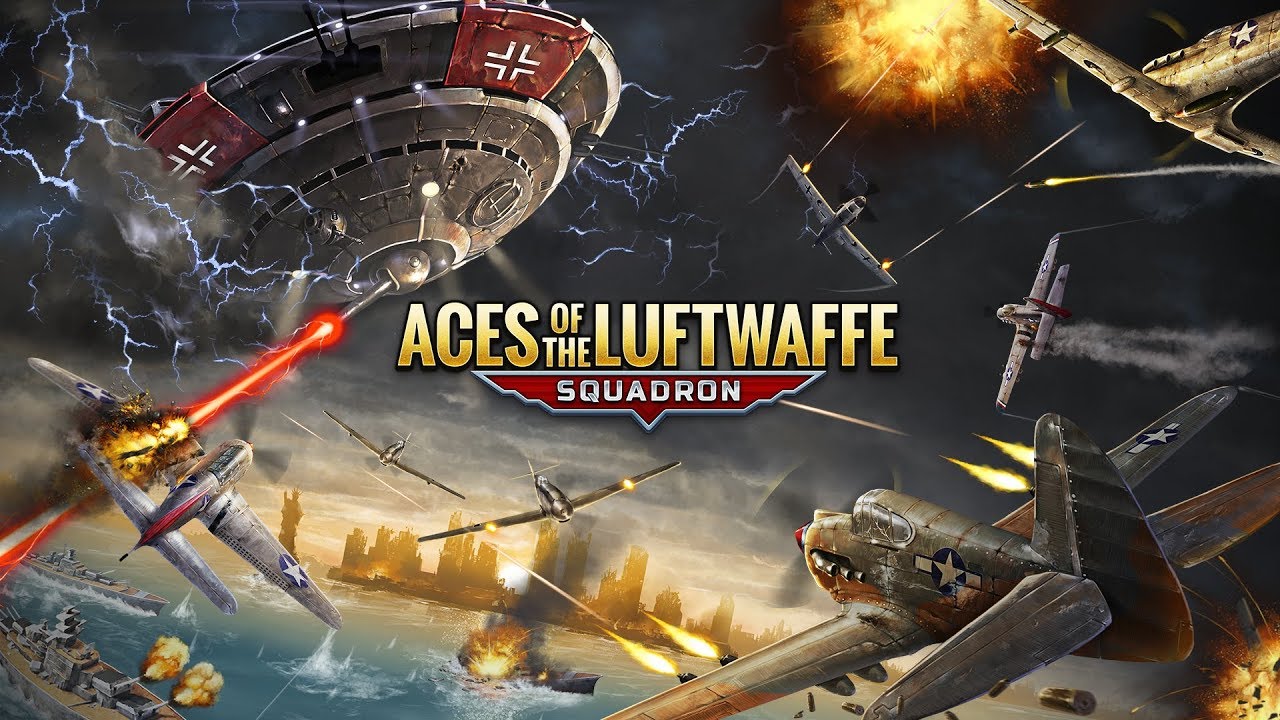 Available in the Nintendo Switch eShop now for £13.49.

Reminiscent of the flying games from the 80’s with the vertical scrolling screen, patterned enemies and levels that end with giant bosses.  Aces of the Luftwaffe-Squadron is an enjoyable game that does not take a lot of skill to master.  If you want something that won’t give you a lot of challenge but will help to pass the time this is the game for you.