Acaratus by Nodbrim Interactive, is a turn-based tactical RPG with card-based combat, large overpowering battlesuits that are fully customisable and a rather in-depth story. Set in a medieval steampunk world, you are Adina Collora, the adoptive child of the late Cillic Collora, once a wealthy slave dealer you are now on the run for possessing an outlawed battle suit. Teaming up with your former slave – Bolt, you set out to free the enslaved people by the oppressing emperor Helios.

The game starts out with a simple intro, one that does a good job of explaining a little about the game’s lore and setting the scene for the upcoming game, then its straight into the action. At each story point within the game, you will get a dialogue screen, some of which allow you multiple choices of text-based speech. These options all have impacts during the game, but you can choose just how you wish to proceed – do you want to be secretive and not have the NPC’s you encounter know your true intentions? Or are you going in guns blazing, shouting to the roof just who you are? it’s up to you. This limited expansion is a nice touch, as the countless click to continue text scenes do drag on somewhat. By making you choose what to say at certain selective points, it does kind of force you to not just skip to the next phase. Although some responses don’t get you quite as far as you would hope! With certain responses ending the dialogue pretty quickly, if you do happen to choose an unfavourable reply, fear not! As you can easily begin the section again from the main map.

Speaking of the game’s map, it’s a lot like the Far Crys map, ok, that’s a bit of an exaggeration! But it is in regards to watchtowers and how they work, albeit it in a much smaller and simpler format. Unlock a tower to reveal large areas of the map, or slowly meander your way around it by visiting blacksmiths and traders, finding loot chests, locating watchtowers and progressing through the main storyline. Although quite linier, you can choose the order you approach the map, visiting the areas that allow you to power up first before heading into battle is always a good choice. Whilst here you can level up  Adina when the time comes, edit your mechs or even build new ones, depending on where you are that is.

The games biggest draw though is the excellent planning and combat stages – setting up your suits correctly with the correct cards behind you is a must if you’re going to progress through the game, especially if you’re playing on the harder difficulty levels. Let’s create a mech and go fighting I hear you cry, well it’s not technically as easy as that, although you could probably get away with that on the lowest difficulty. With each battle suit you create come different challenges and playing styles for you to become accustomed to, from long ranged attacking units, to brawlers and everything in between. Although not every mech part you acquire can be utilised by every other part, some of these bits are more specialised, but thanks to this variety the number of different types of suits you can create is vast. Once created and you get into a battle sequence, it becomes apparent just how well you’ve built them. it’s not over though if you’ve managed to make a boo boo and have sent an underpowered unit into battle as the cards can come into play at this point. Along the bottom of the screen, there are a number of cards, each was selected by you previously at the map stage. These range from defensive cards, movement cards and even repair cards. Utilising them is a simple case of dragging the card onto your chosen unit.

Running around with a few brawler mechs? The repair cards are a must for close quarters combat, where as the extra action point cards help to get an extra shot off with the long range suits. Its all about balance between your mech builds, your cards and your movement around the battle area, put that together with the turn-based aspect of the game and you’ve got a rather solid combat game. One of the more unusual aspects of the game is the randomised map, it is littered with random encounters and surprises to keep you on your toes. These encounters will change, so each run through can, and will be a little different from the last.

Away from the story mode, there is a skirmish mode, one that takes all the battle aspects of the base game but gives you free reign on what to create. Well, up to a point that is, as with the main game there are still parts of the units that can only be used with certain others, but that doesn’t distract away from the fun in creating your own suits. Build you army, choose your cards and go fight. It’s a nice mode that will help you hone you battle skills ready for the main game. At the moment the online function is disabled due to some problems, it was a shame to not be able to play against some real players, but it’s not the end of the world as the game is still being developed, I honestly can’t wait to give it a go when is up and running! These online skirmishes could be a real winner, with people from all over the globe creating there own strange and custom mechs to battle it out with, it could be the highlight of what is already a very good game. 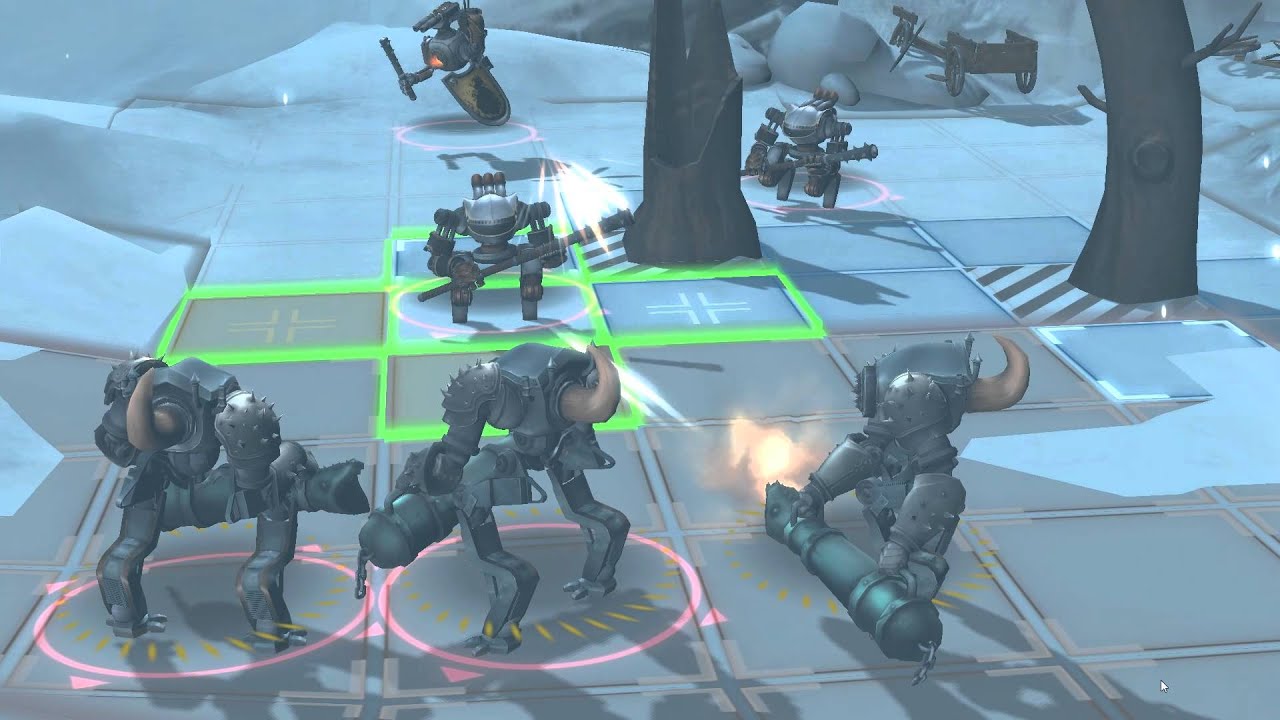 A turn based RPG with battle suits! what more could you ask for. With solid gameplay and a nice overall feel to the customisation. Acaratus is a game to keep an eye on!